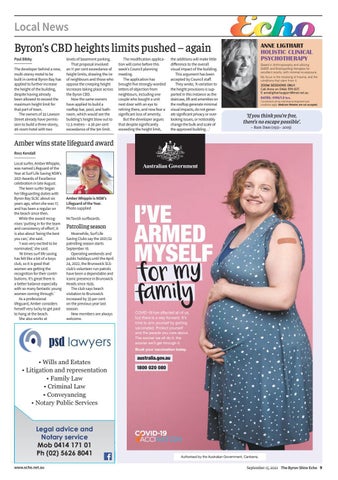 Byron’s CBD heights limits pushed – again Paul Bibby The developer behind a new, multi-storey motel to be built in central Byron Bay has applied to further increase the height of the building, despite having already been allowed to exceed the maximum height limit for that part of town. The owners of 33 Lawson Street already have permission to build a three-storey, 46-room hotel with two

levels of basement parking. That proposal involved an 11 per cent exceedance of height limits, drawing the ire of neighbours and those who oppose the creeping height increases taking place across the Byron CBD. Now the same owners have applied to build a rooftop bar, pool, and bathroom, which would see the building’s height blow out to 12.5 metres – a 38 per cent exceedance of the 9m limit.

The modification application will come before this week’s Council planning meeting. The application has brought five strongly-worded letters of objection from neighbours, including one couple who bought a unit next door with an eye to retiring there, and now fear a significant loss of amenity. But the developer argues that despite significantly exceeding the height limit,

the additions will make little difference to the overall visual impact of the building. This argument has been accepted by Council staff. They wrote, ‘A variation to the height provisions is supported in this instance as the staircase, lift and amenities on the rooftop generate minimal visual impacts, do not generate significant privacy or overlooking issues, or noticeably change the bulk and scale of the approved building…’

ANNE LIGTHART HOLISTIC CLINICAL PSYCHOTHERAPY Based in Anthroposophy and utilising EMDR and Brainspotting therapies for excellent results, with minimal re-exposure. My focus is the resolving of trauma, and the conditions that stem from it. ZOOM SESSIONS ONLY. Call Anne on 0466 599 837. E anneligthartsupport@iinet.net.au RATES: $190/1.5 hrs.

Concessions are by individual arrangement and conditions apply. Medicare Rebates are not accepted.

‘If you think you’re free, there’s no escape possible’. ȑëŔ'ëƆƆȎǨǰǪǨȑǩǧǨǰȏ

Amber wins state lifeguard award Ross Kendall Local surfer, Amber Whipple, was named Lifeguard of the Year at Surf Life Saving NSW’s 2021 Awards of Excellence celebration in late August. The keen surfer began her lifeguarding duties with Byron Bay SLSC about six years ago, when she was 17, and has been a regular on the beach since then. While the award recognises ‘putting in for the team and consistency of effort’, it is also about ‘being the best you can,’ she said. ‘I was very excited to be nominated,’ she said. ‘At times surf life saving has felt like a bit of a boys club, so it is good that women are getting the recognition for their contributions. It’s great there is a better balance especially with so many fantastic young women coming through.’ As a professional lifeguard, Amber considers herself very lucky to get paid to hang at the beach. She also works at

Patrolling season Meanwhile, Surf Life Saving Clubs say the 2021/22 patrolling season starts September 18. Operating weekends and public holidays until the April 24, 2022, the Brunswick SLSclub’s volunteer-run patrols have been a dependable and iconic presence in Brunswick Heads since 1935. The club says beach visitation to Brunswick increased by 35 per cent on the previous year last season. New members are always welcome.

Authorised by the Australian Government, Canberra.