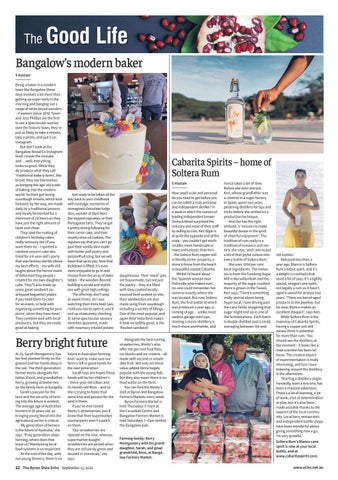 Bangalow’s modern baker S Haslam Being a baker in a modern town like Bangalow these days involves a lot more than getting up super early in the morning and banging out a range of white bread wonders – if owners (since 2019) Tyson and Jess Phillips are the first to see a spectacular sunrise over the historic town, they’re just as likely to take a minute, take a photo, and put it on Instagram. But don’t look at the Bangalow Bread Co Instagram feed! I made the mistake and… well, everything looks so good. While they do produce what they call ‘traditional bakery items’, like bread, they see themselves as bringing the age-old trade of baking into the modern world. So their gut-loving sourdough breads, which look fantastic by the way, are made daily by a traditional process and slowly fermented for a minimum of 24 hours so they have just the right amount of taste and chew. They take the making of children’s birthday cakes really seriously too (if you want them to) – I spotted a rainbow unicorn cake destined for a 6-year-old’s party that was fantasy worlds above my best efforts – my wife still laughs about the horror realm of deformed frog-people I created for my own daughter’s cake. They’ll also make up some great sandwich (or artisanal baguette!) plates if you need them to cater for an event, or help with organising something for your picnic, when they have time! They combine well with local producers, but they are really good at baking.

Cabarita Spirits – home of Soltera Rum S Haslam Get ready to be taken all the way back to your childhood with nostalgic memories of reimagined chocolate fudge slice, wonder at their Mars Bar-topped cupcakes, or their Portuguese tarts. They’ve got a pretty strong following for their carrot cake, and their chunky olive oil cookies. The regulars say that you can’t go past their vanilla slice made with butter puff pastry and passionfruit icing, but we will leave that up to you. Now that lockdown is lifted, it’s even more enjoyable to go in and choose from the array of delectables – the wooden-floored building is an old and stylish one with great high ceilings. The offerings don’t stop at sweet treats. As I was watching their Insta feed (yes, I told you not to open it, you’ll end up obsessively checking it) some spectacular savoury danishes appeared, made with rosemary infused potato

Berry bright future At 25, Sarah Montgomery has her feet planted firmly on the ground and her hands deep in the soil. The third-generation farmer works alongside her father, David, and grandfather, Kerry, growing strawberries on the family farm at Eungella. Sarah’s passion for the land and the security of farming into the future is evident. The average age of Australian farmers is 56 years old, so bringing young blood into the agricultural sector is critical. ‘My generation of farmers is the future of Australia,’ she says. ‘If my generation stops farming, where does that leave us? Maintaining local food systems is so important. ‘At the end of the day, without young farmers, there is no

future in Australian farming. And I want to make sure our farm is left in good hands for the next generation.’ Sarah says she hopes those hands will be her children’s – three-year-old Lillian and 10-month-old Ross – and so she is trying to foster that same love and passion for the land in them. If you’ve ever tasted Monty’s strawberries, you’ll know that their supermarket counterparts aren’t a patch on them. ‘Our strawberries are ripened on the vine, whereas supermarket-bought strawberries are picked when they are still partly green and doused in chemicals,’ she says.

dauphinoise. Their ‘meat’ pies are housemade, but not just the pastry – they are filled with slow cooked locallysourced beef cooked on site; their sandwiches are also made using fresh sourdough including a variety of fillings. One of the most popular, and again their Insta feed makes it look incredibly good, is the ‘Reuben sandwich’ Alongside the best-tasting strawberries, Monty’s also offer 100 per cent fruit flats, ice-blocks and ice-creams – all made with second or unsaleable fruit. Not only are these value-added items hugely popular with the young folk, but they also mean there is no food waste on the farm. You can find the Monty’s stall at Byron and Bangalow Farmers Markets every week. Byron Farmers Market is held Thursdays 7–11am at the Cavanbah Centre and Bangalow Farmers Market is held Saturdays 7–11am behind the Bangalow pub.   Farming family: Kerry Montgomery with his granddaughter, Sarah, and great grandchild, Ross, at Bangalow Farmers Market.

How small-scale and personal do you need to get before you can be called a truly artisanal and independent distiller? In a week in which the owners of leading independent brewer Stone & Wood surprised the industry and most of their staff by selling to Lion, Keri Algar is at quite the opposite end of the scale – you couldn’t get much smaller, more handmade or more enthusiastic than Keri – the Soltera Rum copper still is literally on her property, a stone’s throw from the beach in beautiful coastal Cabarita. Whilst I’d heard about the ‘Spanish woman near Pottsville who makes rum’, no-one could remember her name or exactly where she was located. But now Soltera Rum, the first bottle of which was produced a year ago, is coming of age… unlike most useless garage start-ups, starting a micro-distillery is much more worthwhile, and

hence takes a bit of time. Before she even started, Keri, whose grandfather was a chemist in a sugar factory in Spain, spent two years pestering distillers for tips and tricks before she settled on a production technique. And she has the right attitude, a ‘mission to make beautiful booze in the spirit of cheerful enjoyment’. The tradition of rum really is a tradition of romance and revelry, she says, ‘and I aim to put a bit of that joyful culture into every bottle of Soltera Rum.’ She uses 100d per cent local ingredients. The molasses is from the Condong Sugar Mill in Murwillumbah and the majority of the sugar crushed there is grown in the Tweed. Keri says, ‘There’s something really special about being hyper local, I love driving past the cane fields, imagining that sugar might end up in one of the fermentations. Each batch is double distilled and is small, averaging between 100 and

140 bottles.’ Released less than a year ago, Blanco is Soltera Rum’s debut spirit, and it’s a delight in cocktails that need a bit of sass. It’s a lightly spiced, unaged cane spirit, not legally a rum as it hasn’t aged in wood for at least two years. ‘There are barrel-aged products in the pipeline, but for now, Blanco makes an excellent daiquiri!’, says Keri. While Soltera Rum is the mainstay of Cabarita Spirits, having a copper pot still means there is potential for more than rum. ‘You should see the distillery at the moment – it looks like a mad scientist has been let loose. The creative aspect of experimentation is really interesting, and fun! I love tinkering around the distillery in the afternoons. ‘Starting a distillery singlehandedly, even a tiny one, has been a massive adventure. There’s a lot of learning, a lot of work, a lot of determination at play, but it’s also been made possible thanks to the support of the local community. Local bars, restaurants and independent bottle shops have been wonderful about giving something new a go, I’m very grateful.’ Soltera Rum’s Blanco cane spirit is now at your local bottlo, and at www.cabaritaspirits.com.