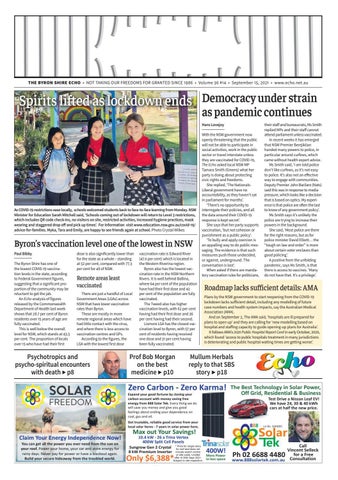 Byron’s vaccination level one of the lowest in NSW Paul Bibby The Byron Shire has one of the lowest COVID-19 vaccination levels in the state, according to Federal Government figures, suggesting that a significant proportion of the community may be reluctant to get the jab. An Echo analysis of figures released by the Commonwealth Department of Health last week shows that 28.7 per cent of Byron residents over 15 years of age are fully vaccinated. This is well below the overall level for NSW, which stands at 43.5 per cent. The proportion of locals over 15 who have had their first

dose is also significantly lower than for the state as a whole – standing at 52 per cent, compared with 77.3 per cent for all of NSW.

Remote areas least vaccinated There are just a handful of Local Government Areas (LGAs) across NSW that have lower vaccination rates than Byron. These are mostly in more remote regional areas which have had little contact with the virus, and where there is less access to vaccination centres and GPs. According to the figures, the LGA with the lowest first dose

With the NSW government now openly threatening that the public will not be able to participate in social activities, work in the public sector or travel interstate unless they are vaccinated for COVID-19, The Echo asked local NSW MP Tamara Smith (Greens) what her party is doing about protecting civic rights and freedoms. She replied, ‘The NationalsLiberal government have no accountability, as they haven’t sat in parliament for months’. ‘There’s no opportunity to interrogate their policies, and all the data around their COVID-19 response is kept secret’. She says that her party supports vaccination, ‘but not cohesion or punishment as a public policy’. ‘To bully and apply coercion is an appalling way to do public messaging. The evidence is that such measures push those undecided, or against, underground. The conversation is lost’. When asked if there are mandatory vaccination rules for politicians,

şëĎŔëżōëĈŊƆƆƖǔĶĈĶĕŕƐĎĕƐëĶōƆǼl Plans by the NSW government to start reopening from the COVID-19 lockdown lacks sufficient detail, including any modelling of future case numbers and health system impacts, say the Australian Medical Association (AMA). And on September 2, The AMA said, ‘hospitals are ill prepared for plans to open up’ and they are calling for ‘new modelling based on hospital and staffing capacity to guide opening-up plans for Australia’. It follows AMA’s 2020 Public Hospital Report Card in early October, 2020, which found ‘access to public hospitals treatment in many jurisdictions is deteriorating and public hospital waiting times are getting worse’.

their staff and bureaucrats, Ms Smith replied MPs and their staff cannot attend parliament unless vaccinated. In recent weeks it has emerged that NSW Premier Berejiklian handed many powers to police, in particular around curfews, which came without health expert advice. Ms Smith said, ‘I am told police don’t like curfews, as it’s not easy to police. It’s also not an effective way to engage with communities. Deputy Premier John Barilaro (Nats) said this was in response to media pressure, which looks like a decision that is based on optics. My experience is that police are often the last to know of any government policy’. Ms Smith says it’s unlikely the police are trying to increase their powers in the background. She said, ‘Most police are there for the right reasons, but as for police minister David Elliott… the “tough on law and order” is more about certain voter enclaves than good policing’. A positive from the unfolding pandemic, says Ms Smith, is that there is access to vaccines. ‘Many do not have that. It’s a privilege’.