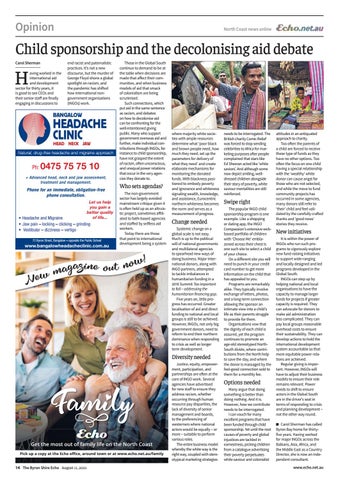 aving worked in the international aid and development sector for thirty years, it is good to see CEOs and their senior staff are finally engaging in discussions to

end racist and paternalistic practices. It’s not a new discourse, but the murder of George Floyd shone a global spotlight on racism, and the pandemic has shifted how international nongovernment organisations (INGOs) work.

Phone for an immediate, obligation-free phone consultation. Let us help you gain a better quality of life...

Those in the Global South continue to demand to be at the table when decisions are made that affect their communities, and when business models of aid that smack of colonialism are being scrutinised. Such connections, which put aid in the same sentence as racism, and debates on how to decolonise aid can be confronting for the well-intentioned giving public. Many who support government overseas aid and further, make individual contributions through INGOs, for instance to child sponsorship, have not grasped the extent of racism, often unconscious, and unequal power relations that occur in the very agencies they donate to.

Who sets agendas? The non-government sector has largely avoided mainstream critique given it is often held up as an altruistic project, sometimes affiliated to faith-based agencies and staffed by selfless aid workers. Today there are those that point to international development being a system

where majority white societies with ample resources determine what ‘poor black and brown people need, how much they need, set up the parameters for delivery of what they need’ and create elaborate mechanisms for monitoring the donated funds. With blackness positioned to embody poverty and ignorance and whiteness signaling wealth, knowledge, and assistance, Eurocentric northern whiteness becomes the norm and serves as a measurement of progress.

Change needed Systemic change on a global scale is not easy. Much is up to the political will of national governments and multilateral agencies to spearhead new ways of doing business. Major international donors, along with INGO partners, attempted to tackle imbalances in humanitarian funding in a 2016 Summit Too important to fail – addressing the humanitarian financing gap. Five years on, little progress has occurred. Greater localisation of aid and direct funding to national and local groups is still to be achieved. However, INGOs, not only big government donors, need to reform to end their northern dominance when responding to crisis as well as longer term development.

Justice, equity, empowerment, participation, and partnerships are often at the core of INGO work. Several agencies have advertised for new staff to ensure they address racism, whether occurring through human resource pay disparities, the lack of diversity of senior management and boards, to the preferencing of westerners where national actors would be equally – or more – suitable to perform various roles. The entire business model whereby the white way is the right way, coupled with stereotypical marketing strategies

needs to be interrogated. The British charity Comic Relief was forced to stop sending celebrities to Africa for marketing purposes after people complained that stars like Ed Sheeran acted like ‘white saviors’. And although some now depict smiling, welldressed children alongside their story of poverty, white saviour mentalities are still reinforced.

Swipe right The popular INGO child sponsorship program is one example. Like a shopping or dating app, the INGO Compassion’s extensive webbased portfolio of children with ‘Choose Me’ emblazoned across their chest is one such site to select a child of your choice. On a different site you will need to punch in your credit card number to get more information on the child that has appealed to you. Programs are remarkably alike. They typically involve exchange of letters, photos, and a long-term connection allowing the sponsor an intimate view into a child’s life as their parents struggle to provide for them. Organisations vow that the dignity of each child is assured, yet the program continues to promote an age-old stereotyped NorthSouth divide, where contributions from the North help to save the day, and where the donor is massaged by the feel-good connection sold to them for a monthly fee.

Options needed Many argue that doing something is better than doing nothing. And it is. However, how we contribute needs to be interrogated. I can vouch for many excellent programs that have been funded through child sponsorship. Yet until the root causes of poverty and global injustices are tackled in earnestness, picking children from a catalogue advertising their poverty perpetuates white saviour and colonialist

attitudes in an antiquated approach to charity. Too often the parents of a child are forced to receive these type of funds as they have no other options. Too often the focus on one child having a special relationship with the ‘wealthy’ white donor can cause angst for those who are not selected, and while the move to fund community projects has occurred in some agencies, many donors still refer to ‘their’ child and feel validated by the carefully crafted thanks and ‘good news’ stories they receive.

New initiatives It is within the power of INGOs who run such programs to vigorously explore new fund-raising initiatives to support wide-ranging and locally designed and led programs developed in the Global South. INGOs can step up by helping national and local organisations to have the capacity to manage larger funds for projects if greater capacity is required. They can advocate for donors to make aid administration less complicated. They can pay local groups reasonable overhead costs to ensure their sustainability. They can develop actions to hold the international development system accountable so that more equitable power relations are achieved. Regular giving is important. However, INGOs will have to adjust their business models to ensure their role remains relevant. Power needs to shift to ensure actors in the Global South are in the driver’s seat in terms of responding to crisis and planning development – not the other way round. Q Carol Sherman has called Byron Bay home for thirtyfive years. Having worked for major INGOs across the Balkans, Asia, Africa, and the Middle East as a Country Director, she is now an independent consultant.