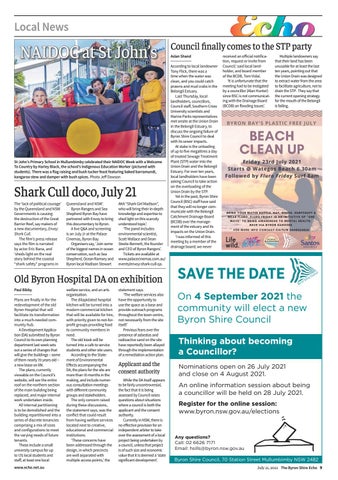 ĲëſŊ!ƖōōĎşĈşǽ`ƖōƷǟǞ The ‘lack of political courage’ by the Queensland and NSW Governments is causing the destruction of the Great Barrier Reef, say makers of a new documentary, Envoy: Shark Cull. The film’s press release says the film is narrated by actor Eric Bana, and ‘sheds light on the real story behind the coastal “shark safety” programs in

Queensland and NSW’. Byron Rangers and Sea Shepherd Byron Bay have partnered with Envoy to bring this documentary to Byron. A live Q&A and screening is on July 21 at the Palace Cinemas, Byron Bay. Organisers say, ‘Join some of the biggest names in ocean conservation, such as Sea Shepherd, Ocean Ramsey and Byron local Madison Stewart

AKA “Shark Girl Madison”, who will bring their in-depth knowledge and expertise to shed light on this scarcely understood topic’. ‘The panel includes environmental scientist, Scott Wallace and Dean Steele-Bennett, the founder and CEO of Byron Rangers’. Tickets are available at www.palacecinemas.com.au/ events/envoy-shark-cull-qa.

wōĎ ƷſşŕLşƆżĶƐëō'şŕĕƶĲĶćĶƐĶşŕ Paul Bibby Plans are finally in for the redevelopment of the old Byron Hospital that will facilitate its transformation into a much-needed community hub. A Development Application (DA) submitted by Byron Council to its own planning department last week sets out a series of changes that will give the buildings – some of them nearly 70 years old – a new lease on life. The plans, currently viewable on the Council’s website, will see the entire roof on the northern section of the main building being replaced, and major internal work undertaken inside. All internal partitioning is to be demolished and the building repartitioned into a series of discrete tenancies comprising a mix of sizes and configurations to meet the varying needs of future tenants. These include a small university campus for up to 175 local students and staff, at least one local www.echo.net.au

welfare service, and an arts organisation. The dilapidated hospital kitchen will be turned into a modern commercial kitchen that will be available for hire, with priority given to not-forprofit groups providing food to community members in need. The old kiosk will be turned into a cafe to service students and other site users. According to the Statement of Environmental Effects accompanying the DA, the plans for the site are more than 18 months in the making, and include numerous consultation meetings with different community groups and stakeholders. The only concern raised during these discussions, the statement says, was the conflict that could result from having welfare services located next to creative, educational and commercial institutions. ‘These concerns have been addressed through the design, in which precincts are well separated with multiple access points,’ the

statement says. ‘The welfare services also have the opportunity to use the space as a base and provide outreach programs throughout the town centre, not necessarily from the site itself.’ Previous fears over the presence of asbestos and radioactive sand on the site have reportedly been allayed through the implementation of a remediation action plan.

żżōĶĈëŕƐëŕĎƐĲĕ ĈşŕƆĕŕƐëƖƐĲşſĶƐƷ While the DA itself appears to be fairly uncontroversial, the fact that it is being assessed by Council raises questions about situations where a council is both the applicant and the consent authority. Currently in NSW, there is no effective provision for an independent arbiter to take over the assessment of a local project being undertaken by a council, unless that project is of such size and economic value that it is deemed a ‘state significant development’.

!şƖŕĈĶōǕŕëōōƷĈşŔĕƆƐşƐĲĕ¨żëſƐƷ Aslan Shand According to local landowner Tony Flick, there was a time when the water was clean, and you could catch prawns and mud crabs in the Belongil Estuary. Last Thursday, local landholders, councillors, Council staff, Southern Cross University scientists and Marine Parks representatives met onsite at the Union Drain in the Belongil Estuary, to discuss the ongoing failure of Byron Shire Council to deal with its sewer impacts. At stake is the unloading of up to five megalitres a day of treated Sewage Treatment Plant (STP) water into the Union Drain and the Belongil Estuary. For over ten years, local landholders have been asking Council to take action on the overloading of the Union Drain by the STP. Yet in the past, Byron Shire Council (BSC) staff have said that they will no longer communicate with the Belongil Catchment Drainage Board (BCDB) over the management of the estuary and its impacts on the Union Drain.  ‘I was informed of this meeting by a member of the drainage board; we never

received an official notification, request or invite from Council,’ said local landholder, and board member of the BCDB, Tom Vidal. ‘It is unfortunate that the meeting had to be instigated by a councillor (Alan Hunter) since BSC is not communicating with the Drainage Board (BCDB) on flooding issues’.

Multiple landowners say that their land has been unusable for at least the last ten years, pointing out that the Union Drain was designed to extract water from the area to facilitate agriculture, not to drain the STP. They say that the current opening strategy for the mouth of the Belongil is failing.

SAVE THE DATE On 4 September 2021 the community will elect a new Byron Shire Council Thinking about becoming a Councillor? Nominations open on 26 July 2021 and close on 4 August 2021. An online information session about being a councillor will be held on 28 July 2021. Register for the online session: www.byron.nsw.gov.au/elections