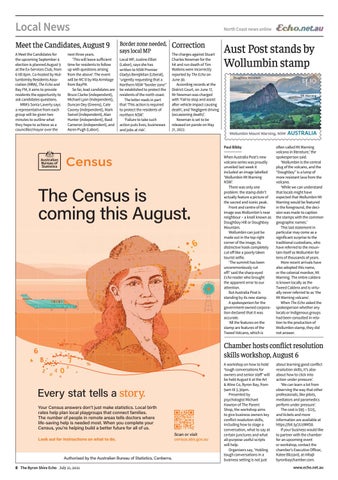 Local News Meet the Candidates, August 9 A Meet the Candidates for the upcoming September 4 election is planned August 9 at the Ex-Services Club, from 6 till 8pm. Co-hosted by Mullumbimby Residents Association (MRA), The Echo and Bay FM, it aims to provide residents the opportunity to ask candidates questions. MRA’s Sonia Laverty says a representative from each group will be given two minutes to outline what they hope to achieve as a councillor/mayor over the

Border zone needed, says local MP Local MP, Justine Elliot (Labor), says she has written to NSW Premier Gladys Berejiklian (Liberal), ‘urgently requesting that a Northern NSW “border zone” be established to protect the residents of the north coast. The letter reads in part that ‘This action is required to protect the residents of northern NSW’. ‘Failure to take such action puts lives, businesses and jobs at risk’.

Correction The charges against Stuart Charles Newman for the hit and run death of Tim Watkins were incorrectly reported by The Echo on June 30. According records at the District Court, on June 17, Mr Newman was charged with ‘Fail to stop and assist after vehicle impact causing death’, and ‘Negligent driving (occasioning death)’. Newman is set to be released on parole on May 21, 2022.

When Australia Post’s new volcano series was proudly unveiled last week it included an image labelled ‘Wollumbin Mt Warning NSW’. There was only one problem: the stamp didn’t actually feature a picture of the sacred and iconic peak. Front and centre of the image was Wollumbin’s near neighbour – a knoll known as Doughboy Hill or Doughboy Mountain. Wollumbin can just be made out in the top right corner of the image, its distinctive hook completely cut off like a poorly taken tourist selfie. ‘The summit has been unceremoniously cut off!’ said the sharp-eyed Echo reader who brought the apparent error to our attention. But Australia Post is standing by its new stamp. A spokesperson for the government-owned corporation declared that it was accurate. ‘All the features on the stamp are features of the Tweed Volcano, which is

often called Mt Warning volcano in literature,’ the spokesperson said. ‘Wollumbin is the central plug of the volcano, and the “Doughboy” is a lump of more resistant lava from the volcano. ‘While we can understand that locals might have expected that Wollumbin Mt Warning would be featured in the foreground, the decision was made to caption the stamps with the common geographic names.’ This last statement in particular may come as a significant surprise to the traditional custodians, who have referred to the mountain itself as Wollumbin for tens of thousands of years. More recent arrivals have also adopted this name, or the colonial moniker, Mt Warning. The entire caldera is known locally as the Tweed Caldera and is virtually never referred to as ‘the Mt Warning volcano’. When The Echo asked the spokesperson whether any locals or Indigenous groups had been consulted in relation to the production of Wollumbin stamp, they did not answer.

A workshop on how to hold ‘tough conversations for owners and senior staff’ will be held August 6 at the Art & Wine Co, Byron Bay, from 9am til 3.30pm. Presented by psychologist Michael Hawton of The Parent Shop, the workshop aims to give business owners key conflict resolution skills, including how to stage a conversation, what to say at certain junctures and what all-purpose useful scripts will help. Organisers say, ‘Holding tough conversations in a business setting is not just

about learning good conflict resolution skills, it’s also about how to click into action under pressure’. ‘We can learn a lot from observing the way that other professionals, like pilots, mediators and paramedics perform under pressure’. The cost is $95 – $125, and tickets and more information are available at https://bit.ly/2UzWKS8. If your business would like to partner with the chamber for an upcoming event or workshop, contact the chamber’s Executive Officer, Katee Blizzard, at info@ byronbaychamber.com.  www.echo.net.au