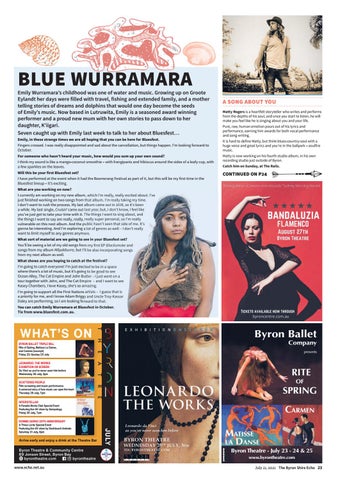 Emily Wurramara’s childhood was one of water and music. Growing up on Groote Eylandt her days were filled with travel, fishing and extended family, and a mother telling stories of dreams and dolphins that would one day become the seeds of Emily’s music. Now based in Lutruwita, Emily is a seasoned award winning performer and a proud new mum with her own stories to pass down to her daughter, K’iigari. Seven caught up with Emily last week to talk to her about Bluesfest… Emily, in these strange times we are all hoping that you can be here for Bluesfest. Fingers crossed. I was really disappointed and sad about the cancellation, but things happen. I’m looking forward to October. For someone who hasn’t heard your music, how would you sum up your own sound? I think my sound is like a mango-coconut smoothie – with frangipanis and hibiscus around the sides of a leafy cup, with a few sparkles on the leaves. Will this be your first Bluesfest set? I have performed at the event when it had the Boomerang Festival as part of it, but this will be my first time in the Bluesfest lineup – it’s exciting. What are you working on now? I currently am working on my new album, which I’m really, really excited about. I’ve just finished working on two songs from that album. I’m really taking my time. I don’t want to rush the process. My last album came out in 2018, so it’s been a while. My last single, Cruisin’ came out last year, but, I don’t know, I feel like you’ve just got to take your time with it. The things I want to sing about, and the things I want to say are really, really, really super personal, so I’m really vulnerable on this next album. And the public hasn’t seen that side of me. It’s gonna be interesting. And I’m exploring a lot of genres as well – I don’t really want to limit myself to any genres anymore. What sort of material are we going to see in your Bluesfest set? You’ll be seeing a lot of my old songs from my first EP Blacksmoke and songs from my album Milyakburra, but I’ll be also incorporating songs from my next album as well. What shows are you hoping to catch at the festival? I’m going to catch everyone! I’m just excited to be in a space where there’s a lot of music, but it’s going to be good to see Ocean Alley, The Cat Empire and John Butler – I just went on a tour together with John, and The Cat Empire – and I want to see Kasey Chambers, I love Kasey, she’s so amazing. I’m going to support all the First Nations artists – I guess that is a priority for me, and I know Adam Briggs and Uncle Troy Kassar Daley are performing, so I am looking forward to that. You can catch Emily Wurramara at Bluesfest in October. Tix from www.bluesfest.com.au.

A SONG ABOUT YOU Matty Rogers is a heartfelt storyteller who writes and performs from the depths of his soul, and once you start to listen, he will make you feel like he is singing about you and your life. Pure, raw, human emotion pours out of his lyrics and performance, earning him awards for both vocal performance and song writing. It is hard to define Matty, but think blues-country-soul with a huge voice and great lyrics and you’re in the ballpark – soulfire music. Matty is now working on his fourth studio album, in his own recording studio just outside of Byron. Catch him on Sunday, at The Rails.

LEONARDO: THE WORKS EXHIBITION ON SCREEN

SCATTERED PEOPLE Film screening and music performance A universal story of how music can open the heart Thursday 29 July, 7pm