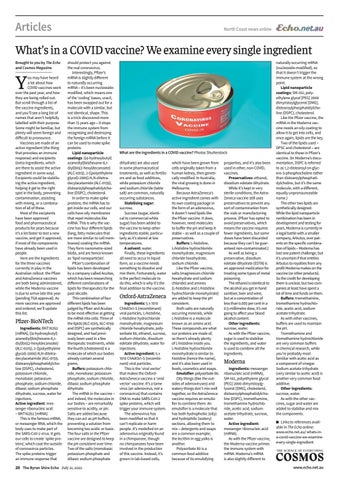 What’s in a COVID vaccine? We examine every single ingredient Brought to you by The Echo and Cosmos Magazine

ou may have heard a lot about how COVID vaccines work over the past year, and how they are being rolled out. But scroll through a list of the vaccine ingredients, and you’ll see a long list of names that aren’t helpfully labelled with their purpose. Some might be familiar, but plenty will seem foreign and difficult to pronounce. Vaccines are made of an active ingredient (the thing that provokes an immune response) and excipients (extra ingredients, which are there to assist the active ingredient in some way). Excipients could be stabilising the active ingredient, helping it get to the right spot in the body, preventing contamination, assisting with mixing, or a combination of all of these. Most of the excipients have been approved food and pharmaceutical products for years because it’s a lot faster to test a new vaccine, and get it approved, if most of the components have already been used in people. Here are the ingredients for the three vaccines currently in play in the Australian rollout: the Pfizer and AstraZeneca vaccines are both being administered, while the Moderna vaccine is due to arrive late this year (pending TGA approval). As more vaccines are approved and ordered, we’ll update this list.

should protect you against the real coronavirus. Interestingly, Pfizer’s mRNA is slightly different to naturally occurring mRNA – it’s been nucleosidemodified, which means one of the ‘coding’ bases, uracil, has been swapped out for a molecule with a similar, but not identical, shape. This is a trick discovered more than 15 years ago – it stops the immune system from recognising and destroying the foreign mRNA before it can be used to make spike proteins. Lipid nanoparticle coatings: ((4-hydroxybutyl) azanediyl)bis(hexane-6,1diyl)bis(2-hexyldecanoate) (ALC-0315), 2-[(polyethylene glycol)-2000]-N,N-ditetradecylacetamide (ALC-0159), distearoylphosphatidylcholine (DSPC), cholesterol. In order to make spike proteins, the mRNA has to get inside our cells, and our cells have oily membranes that repel molecules like mRNA. This is why the vaccine has four different lipids (long, fatty molecules that are more similar to cell membranes) coating the mRNA. They form nanometre-sized blobs, and are hence known as ‘lipid nanoparticles’. Pfizer’s combination of lipids has been developed by a company called Acuitas, which has been researching different combinations of lipids for therapeutics for the past decade. This combination of four different lipids has been judged by Pfizer and Acuitas to be most effective at getting the mRNA into cells. Three of the lipids (ALC-0315, ALC-0159 and DSPC) are synthetically designed, and had previously been used in a few therapeutic treatments, while the fourth (cholesterol) is a molecule of which our bodies already contain several grams. Buffers: potassium chloride, monobasic potassium phosphate, sodium chloride, dibasic sodium phosphate dihydrate. The mRNA in the vaccine – and indeed, the molecules in our bodies – are remarkably sensitive to acidity, or pH. Salts are added because they can act as pH buffers, preventing a solution from becoming too acidic or basic. The four salts in the Pfizer vaccine are designed to keep the pH consistent over time. Two of the salts (monobasic potassium phosphate and dibasic sodium phosphate

What are the ingredients in a COVID vaccine? Photos Shutterstock dihydrate) are also used in some pharmaceutical treatments, as well as fertilisers and as food additives, while potassium chloride and sodium chloride (table salt) are common, naturally occurring substances. Stabilising sugar: sucrose. Sucrose (sugar, identical to commercial white sugar) has been added to the vaccine to keep other ingredients stable, particularly as it’s stored at low temperatures. A solvent: water. Finally, these ingredients all need to occur in liquid form, so a vaccine needs something to dissolve and mix them. Fortunately, water is the perfect molecule to do this, which is why it’s the final addition to the vaccine.

wƶĪşſĎȒƆƐſëØĕŕĕĈë Ingredients: 5 x 1010 ChAdOx1-S (recombinant) viral particles, L-histidine, L-histidine hydrochloride monohydrate, magnesium chloride hexahydrate, polysorbate 80, ethanol, sucrose, sodium chloride, disodium edetate dihydrate, water for injections. Active ingredient: 5 x 1010 ChAdOx1-S (recombinant) viral particles. This is the ‘viral vector’ that makes the OxfordAstraZeneca vaccine a ‘viral vector’ vaccine. It’s a tame virus (an adenovirus, not a coronavirus) that contains DNA to make SARS-CoV-2 spike proteins, which will trigger your immune system. The adenovirus has been modified so that it can’t replicate or harm people. It’s modelled on an adenovirus originally found in a chimpanzee, though no chimpanzees have been involved in the production of this vaccine. Instead, it’s grown in lab-based cells,

which have been grown from cells originally taken from a human kidney, then genetically modified. In Australia, the viral growing is done in Melbourne. Because AstraZeneca’s active ingredient comes with its own coating package in the form of an adenovirus, it doesn’t need lipids like the Pfizer vaccine. It does, however, need molecules to buffer the pH and keep it stable – as well as a couple of preservatives. Buffers: L-histidine, L-histidine hydrochloride monohydrate, magnesium chloride hexahydrate, sodium chloride. Like the Pfizer vaccine, salts (magnesium chloride hexahydrate and sodium chloride) and amines (L-histidine and L-histidine hydrochloride monohydrate) are added to keep the pH consistent. Both salts are naturally occurring minerals, while L-histidine is a molecule known as an amino acid. These compounds are what our proteins are made of, so there’s already plenty of L-histidine inside you. L-histidine hydrochloride monohydrate is similar to histidine (hence the name), and it’s also been used in foods, cosmetics and soaps. Emulsifier: polysorbate 80. Oily things (like the outsides of adenoviruses) and watery things don’t mix well together, so the AstraZeneca vaccine requires an emulsifier to combine them. An emulsifier is a molecule that has both hydrophobic (oily) and hydrophilic (watery) sections, allowing them to mix – detergents and soaps are a common example; the lecithin in egg yolks is another. Polysorbate 80 is a common food additive because of its emulsifying

properties, and it’s also been used in other, non-COVID, vaccines. Preservatives: ethanol, disodium edetate dihydrate. While it’s kept in very sterile conditions, the AstraZeneca vaccine still uses preservatives to prevent any sort of contamination from the vials or manufacturing process. (Pfizer has opted to avoid preservatives, which means the vaccine requires fewer ingredients, but some doses have been discarded because they can’t be guaranteed non-contaminated.) As well as being a preservative, disodium edetate dihydrate (EDTA) is an approved medication for treating some types of metal poisoning. The ethanol is identical to the alcohol you get in hand sanitiser, beer and wine, but at a concentration of less than 0.005 per cent in a 0.5-millimetre dose, it’s not going to affect your blood alcohol content. Other ingredients: sucrose, water. As with the Pfizer vaccine, sugar is used to stabilise the ingredients, and water is used to combine all the ingredients.

naturally occurring mRNA (nucleoside-modified), so that it doesn’t trigger the immune system at the wrong point. Lipid nanoparticle coatings: SM-102, polyethylene glycol [PEG] 2000 dimyristoylglycerol [DMG], distearoylphosphatidylcholine (DSPC), cholesterol. Like the Pfizer vaccine, the mRNA in the Moderna vaccine needs an oily coating to allow it to get into cells, and once again, lipids are the key. Two of the lipids used – DPSC and cholesterol – are identical to those in Pfizer’s vaccine. (In Moderna’s documentation, DSPC is referred to as 1,2-distearoyl-sn-glycero-3-phosphocholine rather than distearoylphosphatidylcholine, but it’s the same molecule, with a different, equally unpronounceable name.) The other two lipids are synthetically designed. While the lipid nanoparticle combination has been in development and testing for years, Moderna is currently in a legal battle with a smaller company, Arbutus, over patents on the specific combination of lipids – Moderna has lost one patent challenge, but it’s uncertain if that entitles Arbutus to royalties from any profit Moderna makes on the vaccine (or other products). So the credit for developing them is unclear, but two companies at least have spent a lot of time and funds on them. Buffers: tromethamine, tromethamine hydrochloride, acetic acid, sodium acetate trihydrate. As with other vaccines, buffers are used to maintain the pH. Tromethamine and tromethamine hydrochloride are very common buffers in chemical research, while you’re probably most familiar with acetic acid as a component of vinegar. Sodium acetate trihydrate (very similar to acetic acid) is another very common food additive. Other ingredients: sucrose, water. As with the other vaccines, sugar and water are added to stabilise and mix the components. Q Links to references available in The Echo online: www.echo.net.au/ whats-ina-covid-vaccine-we-examineevery-single-ingredient