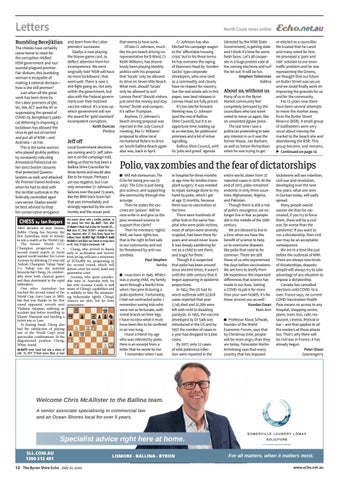 Bumbling Berejiklian The chooks have certainly come home to roost for the corruption riddled NSW government and ‘our’ scandal plagued premier. Fair dinkum, this bumbling woman is incapable of making a rational decision – how is she still premier? Just when all the great work has been done by the Labor premiers of Qld, Vic, WA, ACT and the NT in suppressing the spread of COVID-19, Berejiklian’s political dithering in imposing a lockdown has allowed the virus to get out of control and put all of NSW – and Australia – at risk. This is the same woman who played grubby politics by constantly ridiculing Annastacia Palaszczuk on her strict border closures that protected Queenslanders so well; and attacked Vic Premier Daniel Andrews when he had to deal with the terrible outbreak in the federally controlled aged care sector. Gladys would be best advised to drop her conservative arrogance

CHESS by Ian Rogers After decades of near misses, Bobby Cheng has become the first Australian, male or female, to win a match at the World Cup. The former World U/12 Champion progressed to a second round match in Sochi against world number five Levon Aronian by defeating 23-year-old Turkish Champion Vahap Sanal 3-1. Vahap was the nominal favourite but Cheng, 24, comfortably drew both classical games and then dominated in the rapid tiebreakers. One other Australian has reached the second round of the World Cup, Gary Lane in 2005, but that was thanks to his first round opponent, seventh seed Vladimir Akopian, suffering an accident just before travelling to Khanty Mansiysk and handing a forfeit win to Lane. In beating Sanal, Cheng also had the satisfaction of playing one of the World Cup’s most spectacular combinations. In the diagrammed position Cheng, White, found:

and learn from the Labor premiers’ successes. Gladys is now playing the blame-game card, to deflect attention from her incompetence. We were originally told ‘NSW will have no more lockdowns’, that went well. There is now a shit-fight going on, not only within the government, but also with the Federal government over their botched vaccine rollout. It’s a toss-up which government will win the award for ‘gold standard’ incompetent corruption. Keith Duncan Pimlico

`ĕǔşǔ Local Government elections are coming and Cr Jeff Johnson is on the campaign trail, telling us that he has been a Ballina Shire Councillor for three terms and would also like to be mayor. Perhaps I am too negative, but I can only remember Cr Johnson’s failures over the past 13 years, like the BMX track brain fart that was immediately and strongly rejected by the community and the ocean pool two pawns down with a terrible position, so the young Turk tried 36...Kxf7. Then after 37.Bxe6+! Black had to play the humble 37... Ke8 since 37...Rxe6 38.Rd7+ would be hopeless. However, after 37...Ke8 Cheng found the brilliant finish 38.Bf5! Ng5 39.Rd8+!! Kxd8 40.Qd5+! and Black was forced to resign since on 40...Ke8, 41.Qg8 is checkmate. 1-0

Cheng, who arrived in Russia early to acclimatise and recover from jet lag, will earn a minimum of $US4,800 for progressing to the second round, which will almost cover his travel, hotel and quarantine costs. Aronian, who spent considerable time in Australia with his late wife Arianne Caoili, is well aware of Cheng’s capabilities and is unlikely to take the unassuming Sydneysider lightly. Cheng’s chances are slim, but far from nonexistent.

that seems to have sunk. Of late Cr Johnson, much like his pro beach driving corepresentative for B Ward, Cr Keith Williams, has shamelessly been playing identity politics with his proposal that ‘locals’ only be allowed to drive on Seven Mile Beach. What next, should ‘locals’ only be allowed to surf Lennox Point? Should visitors just send the money and stay home? Divide and conquer, it’s rather Trumpian. Anyhow, Cr Johnson’s beach driving proposal was rejected in the July Council meeting, like Cr Williams’ proposal to allow local recreational fishers to drive on South Ballina Beach again also was, back in April.

Cr Johnson has also hitched his campaign wagon to the ‘affordable housing crisis’ but in his three terms he has overseen the raping of Skennars Head by ‘Gordon Gecko’ type corporate developers, who view land as a commodity and clearly have no respect for country. See the real estate ads in this paper, new land releases in Lennox Head are fully priced. It’s too late for forwardthinking now, Cr Johnson (and the rest of Ballina Shire Council), but it is an opportune time, leading up to an election, for politicians’ promises and a bit of virtue signalling. Ballina Shire Council, with its ‘jobs and greed’ agenda

(directed by the NSW State Government), is getting stale and I think it’s time for some fresh faces. Let’s all cooperate in a huge protest vote at the coming elections and turf the lot out. It will be fun. Stephen Totterman Ballina

ćşƖƐƖƆǽƱĶƐĲşƖƐƖƆ Many of us in the Byron Market community feel completely betrayed by the councillors who last week voted to move us again, like an unwanted jigsaw piece. The last time I saw a politician pretending to take any interest in us it was the former Mayor, Jan Barham, as well as Simon Richardson when he was trying to get

re-elected as a councillor. We trusted that he cared and many voted for him. He promised a ‘park and ride’ solution to our town traffic problem and he was representing the Greens, we thought that our future on Butler Street was secure and we could finally work on improving the grounds for us and for the community. For 13 years now there have been several attempts to move the market away from the Butler Street Reserve (BSR). A small group of stallholders were very vocal about moving the market to the beach site and abandoning the BSR. This group became, and remains, ▶ Continued on page 14

Polio, vax zombies and the fear of dictatorships Q Will Ash denounces The Echo for being pro-vax (9 July). The Echo is just being pro-science, and supporting the community through this scourge. Then he states the vaccines are ‘poison’. Will he now write in and give us the peer reviewed science to support that claim? Then he mentions ‘rights’. Well, we have rights too, that is the right to feel safe in our community and not be threatened by anti-vax zombies. Paul Stephen Yamba Q I was born in 1945. While I was a young child, my family went through a fearful time when I became ill during a polio epidemic. Fortunately, I had not contracted polio. I remember seeing kids who were not so fortunate, with metal braces on their legs. I have no idea what it must have been like to be confined in an iron lung. I have a friend my age who was infected by polio. Here is an excerpt from a letter that he wrote to me: ‘I remember when I was

in hospital for three months at age nine for tendon transplant surgery. It was needed to repair damage done to my hand by polio, which I got at age 15 months, because there was no vaccination at the time. There were hundreds of other kids in the same hospital who were polio victims, most of whom were severely crippled, had been there for years and would never leave. It was deeply saddening for me as a child to see them, and tragic for them.’ Though it is suspected that polio has been around since ancient times, it wasn’t until the 20th century that it began appearing in epidemic proportions. In 1952, the US had its worst outbreak with 57,628 cases reported that year. 3,145 died and 21,269 were left with mild to disabling paralysis. In 1955, the vaccine developed by Dr Salk was introduced in the US and by 1957 the number of cases in a year had dropped to 5,600 cases. By 2017, only 22 cases of wild poliovirus infection were reported in the

entire world, down from 37 reported cases in 2016. At the end of 2017, polio remained endemic in only three countries: Afghanistan, Nigeria, and Pakistan. Though there is still a risk of polio’s resurgence, we no longer live in fear as people did in the middle of the 20th century. We are blessed to live in a time when we have the benefit of science to help us to overcome diseases like polio that used to be common. There are still those of us who experienced the days before vaccinations. We are here to testify from life experience the important differences that science has made in our lives. Getting a COVID-19 jab is for more than your own health, it’s for those around you as well.’ Kundan Ewan Main Arm Q Professor Klaus Schwab,

founder of the World Economic Forum, says that by Christmas time, people will be more angry than they are today. Forecaster Martin Armstrong says that every country that has imposed

lockdowns will see rebellion, civil war and revolution, developing over the next few years: what one sees in Durban today, will sadly spread. Many people would sooner die than be vaccinated, if you try to force them, there will be a civil war, far worse than the pandemic! If you want to run a dictatorship, then civil war may be an acceptable consequence. We are in a time like just before the outbreak of WWI. There are always new kinds of dictatorships; despotic people will always try to take advantage of any situation to impose a dictatorship. Canada has cancelled elections until COVID-19 is over. France says, no current COVID Vaccination Health Pass means no access to any hospital, shopping centre, plane, train, bus, cafe, restaurant, cinema, festival or bar – and that applies to all the workers at those places too. That’s why there will be civil war in France; it has already begun. Peter Olson Goonengerry

Welcome Chris McAllister to the Ballina team. A senior associate specialising in commercial law and an Ocean Shores local for over 5 years.