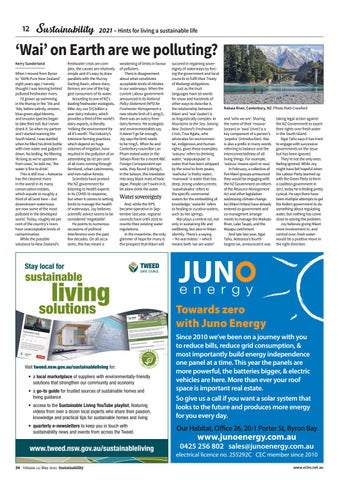 ‘Wai’ on Earth are we polluting? Kerry Sunderland When I moved from Byron to ‘100% Pure New Zealand’ eight years ago, I naively thought I was leaving behind polluted freshwater rivers. I’d grown up swimming in the Murray in the ’70s and ’80s, before salinity, erosion, blue-green algal blooms, and invasive species began to take their toll. But I never drank it. So when my partner and I started roaming the South Island, I was startled when he filled his drink bottle with river water and gulped it down. No boiling. No filtering. ‘As long as we’re upstream from cows,’ he told me, ‘the water is fine to drink’. This is still true – Aotearoa has the cleanest rivers in the world in its many conservation estates, which equate to roughly a third of all land here – but downstream waterways are now some of the most polluted in the developed world. Today, roughly 60 per cent of the country’s rivers have unacceptable levels of contamination. While the possible solutions to New Zealand’s

freshwater crisis are complex, the causes are relatively simple and it’s easy to draw parallels with the Murray Darling Basin, where dairy farmers are one of the biggest consumers of its water. According to one of NZ’s leading freshwater ecologists, Mike Joy, our $15 billion a year dairy industry, which provides a third of the world’s dairy exports, is literally ‘milking the environment for all it’s worth’. The industry’s intensive farming practices, which depend on huge volumes of irrigation, have resulted in the pollution of an astonishing 95–97 per cent of all rivers running through farmland, urban catchments, and non-native forests. Scientists have praised the NZ government for listening to health experts in its COVID-19 response, but when it comes to setting limits to manage the health of waterways, Joy believes scientific advice seems to be considered ‘negotiable’. He points to numerous occasions of political interference over the past few decades. On all occasions, this has meant a

weakening of limits in favour of polluters. There is disagreement about what constitutes acceptable levels of nitrates in our waterways. When the current Labour government announced in its National Policy Statement (NPS) for Freshwater Management a new nitrate limit of 2.4mg/L, there was an outcry from dairy farmers. Yet ecologists and environmentalists say it doesn’t go far enough; Joy says the limit needs to be 1mg/L. When he and Canterbury councillor Lan Pham tested water in the Selwyn River for a recent ABC Foreign Correspondent episode, they found 9.66mg/L. In the Selwyn, this translates into oozy black mats of toxic algae. People can’t swim in it, let alone drink the water.

Water sovereignty And, while the NPS became operative in September last year, regional councils have until 2025 to rewrite their existing water regulations. In the meantime, the only glimmer of hope for many is the prospect that Māori will

succeed in regaining sovereignty of waterways by forcing the government and local councils to fulfil their Treaty of Waitangi obligations. Just as the Inuit languages have 50 words for snow and hundreds of other ways to describe it, the relationship between Māori and ‘wai’ (water) is as linguistically complex. In Mountains to the Sea: Solving New Zealand’s Freshwater Crisis, Tina Ngata, who advocates for environmental, indigenous and human rights, gives these examples: ‘waiunu’ refers to drinking water; ‘waipukepuke’ is water that has been whipped by the wind to form peaks; ‘waihuka’ is frothy water; ‘manowai’ is water that has deep, strong undercurrents; ‘waiwhakaika’ refers to the specific ceremonial waters for the embedding of knowledge; ‘waiariki’ refers to healing or curative waters, such as hot springs. Wai plays a central rol, not only in sustaining life and wellbeing, but also in Māori identity. There’s a saying – ‘Ko wai mātou’ – which means both ‘we are water’

Rakaia River, Canterbury, NZ. Photo Matt-Crawford and ‘who we are’. Sharing the name of their ‘moana’ (ocean) or ‘awa’ (river) is a key component of a person’s ‘pepeha’ (introduction). Wai is also a prefix in many words referring to balance and the interconnectedness of all living things. For example, ‘wairua’ means spirit or soul. In February, a collective of five Māori groups announced they would be engaging with the NZ Government on reform of the Resource Management Act and other legislation addressing climate change. Iwi (Māori tribes) have already entered co-government and co-managment arrangements to manage the Waikato River, Lake Taupō, and the Waiapu catchment. And late last year, Ngai Tahu, Aotearoa’s fourth largest iwi, announced it was

taking legal action against the NZ Government to assert their rights over fresh water in the South Island. Ngai Tahu says it has tried to engage with successive governments on the issue but has been ignored. They’re not the only ones feeling ignored. While Joy might have felt hopeful when the Labour Party teamed up with the Green Party to form a coalition government in 2017, today he is feeling pretty cynical. He says there have been multiple attempts to get the Ardern government to do something about regulating water, but nothing has come close to solving the problem. Joy believes giving Māori more involvement in, and control over, fresh water would be a positive move in the right direction.

Towards zero with Juno Energy

• access to the Sustainable Living YouTube playlist, featuring videos from over a dozen local experts who share their passion, knowledge and practical tips for sustainable homes and living

Since 2010 we’ve been on a journey with you to reduce bills, reduce grid consumption, & most importantly build energy independence one panel at a time. This year the panels are more powerful, the batteries bigger, & electric vehicles are here. More than ever your roof space is important real estate. So give us a call if you want a solar system that looks to the future and produces more energy for you every day.

• quarterly e-newsletters to keep you in touch with sustainability news and events from across the Tweed.

Visit tweed.nsw.gov.au/sustainableliving for: • a local marketplace of suppliers with environmentally-friendly solutions that strengthen our community and economy • a go-to guide for trusted sources of sustainable homes and living guidance