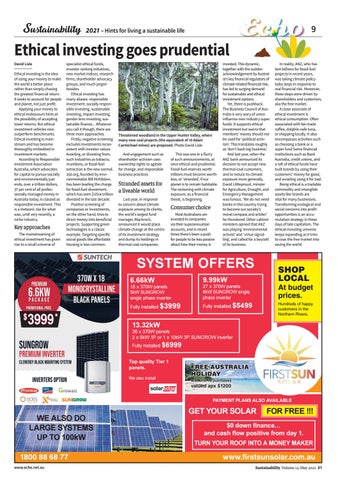 Ethical investing goes prudential David Lisle Ethical investing is the idea of using your money to make the world a better place rather than simply chasing the greatest financial return. It seeks to account for people and planet, not just profit. Applying your money to ethical endeavours hints at the possibility of accepting lower returns. But ethical investment vehicles now outperform benchmarks. Ethical investing is mainstream and has become thoroughly embedded in investment markets. According to Responsible Investment Association Australia, which advocates for capital to pursue socially and environmentally just ends, over a trillion dollars, 37 per cent of all professionally managed money in Australia today, is classed as responsible investment. This is a meteoric rise for what was, until very recently, a niche industry.

specialist ethical funds, investor ranking initiatives, new market indices, research firms, shareholder advocacy groups, and much jargon besides. Ethical investing has many aliases: responsible investment, socially responsible investing, sustainable investing, impact investing, gender lens investing, sustainable finance... Whatever you call it though, there are three main approaches. Firstly, negative screening excludes investments inconsistent with investor values. Avoiding, or divesting from, such industries as tobacco, munitions, or fossil-fuel extraction is the new normal. 350.org, founded by environmentalist Bill McKibben, has been leading the charge for fossil-fuel divestment, which has seen $US14 trillion divested in the last decade. Positive screening of companies or investments, on the other hand, tries to direct money into beneficial projects. Supporting green technologies is a classic example. Targeting specific social goods like affordable housing is less common.

Threatened woodland in the Upper Hunter Valley, where many new coal projects (the equivalent of 10 Adani Carmichael mines) are proposed. Photo David Lisle And engagement such as shareholder activism uses ownership rights to agitate for change, and responsible business practices.

Stranded assets for a liveable world Last year, in response to concern about climate exposure among its clients, the world’s largest fund manager, Blackrock, announced it would place climate change at the centre of its investment strategy and dump its holdings in thermal-coal companies.

This was one in a flurry of such announcements, at once ethical and prudential. Fossil-fuel reserves worth trillions must become worthless, or ‘stranded’, if our planet is to remain habitable. The reckoning with climate exposure, as a financial threat, is beginning.

Consumer choice Most Australians are invested in companies via their superannuation accounts, and in recent times there’s been a push for people to be less passive about how their money is

invested. This dynamic, together with the sudden acknowledgement by Australia’s key financial regulators of climate-related financial risk, has led to surging demand for sustainable and ethical investment options. Yet, there is pushback. The Business Council of Australia is very wary of union influence over industry super funds. It supports ethical investment but warns that members’ money should not be used for ‘political activism’. This translates roughly as ‘don’t bash big business’. And last year, when the ANZ bank announced its decision to not accept new thermal-coal customers, and to reduce its climate exposure more generally, David Littleproud, minster for Agriculture, Drought, and Emergency Management was furious. ‘We do not need banks in this country trying to become our society’s moral compass and arbiter’ he thundered. Other cabinet ministers opined that ANZ was playing ‘environmental activist’ and ‘virtue signalling’, and called for a boycott of its business.

In reality, ANZ, who has lent billions for fossil-fuel projects in recent years, was taking climate policy baby steps in response to real financial risk. Moreover, these steps were driven by shareholders and customers, aka the free market. A close associate of ethical investment is ethical consumption. Often associated with fair-trade coffee, dolphin-safe tuna, or shopping locally. It also encompasses activities such as choosing a bank or a super fund Some financial institutions such as Bank Australia, credit unions, and a raft of ethical funds have built brands by using their customers’ money for good, and avoiding using it for bad. Being ethical is a tradable commodity and intangible assets like brands are vital for many businesses. Transforming ecological and social concerns into profit opportunities is an accumulation strategy in these days of late capitalism. The ethical-investing universe keeps expanding as it tries to coax the free market into saving the world.

Hundreds of happy customers in the Northern Rivers.