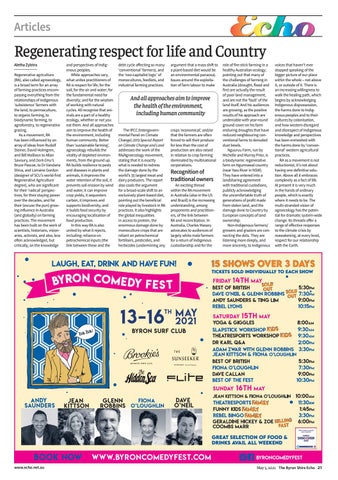 Regenerating respect for life and Country Aletha Zylstra Regenerative agriculture (RA), also called agroecology, is a broad term for an array of farming practices encompassing everything from the relationships of indigenous ‘subsistence’ farmers with the land, to permaculture, to organic farming, to biodynamic farming, to agroforestry, to regenerative grazing. As a movement, RA has been influenced by an array of ideas from Rudolf Steiner, David Holmgren, and Bill Mollison to Allan Savoury, and Dark Emu’s Bruce Pascoe, to Dr Vandana Shiva, and Lorraine Gordon (designer of SCU’s world-first Regenerative Agriculture degree), who are significant for their ‘radical’ perspectives, for their staying power over the decades, and for their (excuse the pun) growing influence in Australia (and globally) on farming practices. The movement has been built on the work of scientists, historians, visionaries, activists, and also, less often acknowledged, but critically, on the knowledge

and perspectives of Indigenous peoples. While approaches vary, what unites practitioners of RA is respect for life; for the soil; for the air and water; for the fundamental need for diversity; and for the wisdom of working with natural cycles. All recognise that animals are a part of a healthy ecology, whether or not you eat them. And all approaches aim to improve the health of the environment, including human community. Better than ‘sustainable farming’, agroecology rebuilds the vitality of depleted environments, from the ground up. RA builds resilience to pests and diseases in plants and animals, it improves the water retention of the soil, it prevents soil erosion by wind and water, it can improve crop yields, it sequesters carbon, it improves and supports biodiversity, and it builds food security by encouraging localisation of food production. In this way RA is also united by what it rejects, including: reliance on petrochemical inputs (the link between these and the

debt cycle affecting so many ‘conventional’ farmers), and the ‘neo-capitalist logic’ of monocultures, feedlots, and industrial farming practices.

argument that a mass shift to a plant-based diet would be an environmental panacea). Issues around the exploitation of farm labour to make

And all approaches aim to improve the health of the environment, including human community The IPCC (Intergovernmental Panel on Climate Change) 2019 Special Report on Climate Change and Land addresses the work of the RA/Agroecology movement, stating that it is exactly what is needed to redress the damage done by the world’s 35 largest meat and dairy producers. The report also cools the argument for a broad-scale shift to an exclusively plant-based diet, pointing out the beneficial role played by livestock in RA practices. It also highlights the global inequalities in access to protein, the enormous damage done by monoculture crops that are reliant on petrochemical fertilisers, pesticides, and herbicides (undermining any

crops ‘economical’, and/or that the farmers are often forced to sell their produce for less than the cost of production are also raised in relation to crop farming dominated by multinational corporations.

Recognition of traditional owners An exciting thread within the RA movement in Australia (also in the US and Brazil) is the increasing understanding, among proponents and practitioners, of the link between RA and reconciliation. In Australia, Charles Massey advocates to audiences of largely white male farmers for a return of Indigenous custodianship and for the

role of fire-stick farming in a healthy Australian ecology; pointing out that many of the challenges of farming in Australia (drought, flood and fire) are actually the result of poor land management, and are not the ‘fault’ of the land itself. And his audiences are growing, as the positive results of his approach are undeniable with year-round ground cover on his farm enduring droughts that have reduced neighbouring conventional farms to denuded dust bowls. Nguuruu Farm, run by Michelle and Murray Prior, is a biodynamic regenerative farm on Ngunnawal country (near Yass River in NSW). They have entered into a landsharing agreement with traditional custodians, publicly acknowledging the uncomfortable truth of generations of profit made from stolen land, and the damage done to Country by European concepts of land ownership. Non-Indigenous farmers/ growers and graziers are connecting the dots. They are listening more deeply, and more sincerely, to Indigenous

voices that haven’t ever stopped speaking of the bigger picture of our place within the whole – not above it, or outside of it. There is an increasing willingness to walk the healing path, which begins by acknowledging Indigenous dispossession, the harms done to Indigenous peoples and to their cultures by colonisation, and how western disregard and disrespect of Indigenous knowledge and perspectives has been enmeshed with the harms done by ‘conventional’ western agricultural practices. RA as a movement is not reductionist, it’s not about having one definitive solution. Above all it embraces complexity as a fact of life. At present it is very much in the hands of ordinary people, which is exactly where it needs to be. The multi-stranded vision of agroecology has the potential for dramatic system-wide change. Its threads offer a range of effective responses to the climate crisis by reawakening, at every level, respect for our relationship with the Earth.

TiCKETS SOLD iNDiViDUALLY TO EACH SHOW