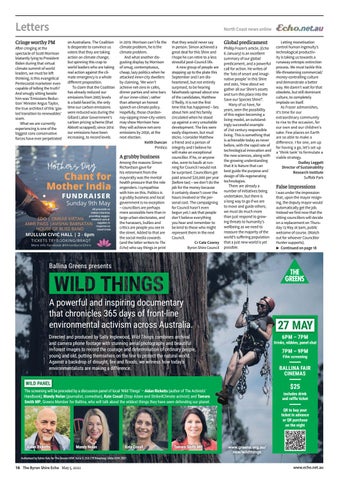 Cringe worthy PM After cringing at the spectacle of Scott Morrison blatantly lying to President Biden during that virtual climate summit of world leaders, we must be left thinking, is this evangelical Pentecostal marketeer even capable of telling the truth? And smugly sitting beside him was ‘Emissions Reduction’ Minister Angus Taylor, the true architect of this ‘gasled transition to renewables’ scam. What we are currently experiencing is one of the biggest cons conservative forces have ever perpetrated

on Australians. The Coalition is desperate to convince us voters that they are taking action on climate change; but spinning this crap to world leaders who are taking real action against the climate emergency is a whole different proposition. To claim that the Coalition has already reduced our emissions from 2005 levels is a bald-faced lie, the only time our carbon emissions were reduced was during the Gillard Labor Government’s carbon pricing scheme (that Abbott scrapped); since 2014 our emissions have been increasing, to record levels

in 2019. Morrison can’t fix the climate problem, he is the climate problem. And what another disgusting display by Morrison of smug, contemptuous, cheap, lazy politics when he attacked inner-city dwellers by claiming, ‘We won’t achieve net-zero in cafes, dinner parties and wine bars of our inner-cities’; rather than attempt an honest speech on climate policy. Hopefully, those chardonnay-sipping inner-city voters may show Morrison how they will achieve net-zero emissions by 2050, at the next election. Keith Duncan Pimlico

A grubby business Among the reasons Simon Richardson gave for his retirement from the mayoralty was the mental health pressure that the role engenders. I sympathise with him on this. Politics is a grubby business and local government is no exception – councillors are perhaps more accessible here than in large urban electorates, and the harassers, bullies and critics are people you see in the street. Added to that are the social media cowards (and the letter writers to The Echo) who say things in print

that they would never say in person. Simon achieved a great deal for this Shire and I hope he can retire to a less stressful post-Council life. A new group of people are stepping up to the plate this September and I am disheartened, but not entirely surprised, to be hearing falsehoods spread about one of the candidates, Matthew O’Reilly. It is not the first time this has happened – lies about him and his family circulated when he stood up against a very unsuitable development. The lies were easily disproven, but mud sticks. I consider Matthew a friend and a person of integrity and I believe he will make an exceptional councillor. If he, or anyone else, were to baulk at running for Council I would not be surprised. Councillors get paid around $20,000 per year (before tax) – we don’t do the job for the money because it certainly doesn’t cover the hours involved or the personal cost. The campaigning for Council hasn’t even begun yet; I ask that people don’t believe everything you hear and remember to be kind to those who might represent them in the next Council. Cr Cate Coorey Byron Shire Council

Global predicament Phillip Frazer’s article, (Echo 6 January) is an excellent summary of our global predicament, and a powerful call for action. He writes of the ‘lots of smart and imaginative people’ in this Shire and asks, ‘How about we gather all our Shire’s assets and turn this place into the Save our Species Shire?’. Many of us have, for years, seen the possibility of this region becoming a living model, an outstandingly successful example of 21st century responsible living. This is something that is achievable today as never before, with the rapid rate of technological innovation and the new sciences, along with the growing understanding that it is Nature that can best guide the purpose and design of life-regenerating technologies. There are already a number of initiatives being undertaken, but there is a long way to go if we are to move and guide others; we must do much more than just respond to growing threats to humanity’s wellbeing as we need to reassure the majority of the world’s suffering population that a just new world is yet possible.

Letting monetisation control human ingenuity’s technological productivity is taking us towards a runaway entropic extinction process. We must tackle this life-threatening commercial/ money-controlling culture and demonstrate a better way. We daren’t wait for that obsolete, but still dominant culture, to completely implode on itself. As Frazer admonishes, it’s time for our extraordinary community to rise to the occasion, for our own and our children’s sake. Few places on Earth are so able to make a difference. I for one, am up for having a go, let’s set up a ‘think tank’ to formulate a viable strategy. Dudley Leggett Director of Sustainability Research Institute Suffolk Park

False impressions I was under the impression that, upon the mayor resigning, the deputy mayor would automatically get the job. Instead we find now that the sitting councillors will decide on a replacement on Thursday 13 May at 9am, public welcome of course. (Watch out for whoever Councillor Hunter supports). ▶ Continued on page 18

A powerful and inspiring documentary that chronicles 365 days of front-line environmental activism across Australia. Directed and produced by Sally Inglewood, Wild Things combines archival and camera phone footage with stunning aerial photography and beautiful in-forest images to record the courage and determination of ordinary people, young and old, putting themselves on the line to protect the natural world. %KEMRWXEFEGOHVSTSJHVSYKLXƤVIERHƥSSHW[I[MXRIWWLS[XSHE]ŭW environmentalists are making a difference.