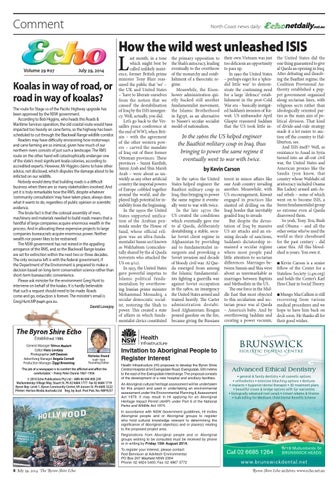 How the wild west unleashed ISIS

Koalas in way of road, or road in way of koalas? The route for Stage 10 of the Pacific Highway upgrade has been approved by the NSW government. According to Bob Higgins, who heads this Roads & Maritime Services operation, the old coastal route would have impacted too heavily on cane farms, so the highway has been scheduled to cut through the Blackwall Range wildlife corridor. Readers may have difficulty envisioning how motorways and cane farming are so inimical, given how much of our northern rivers consists of just such a landscape. The RMS route on the other hand will catastrophically endanger one of the state’s most significant koala colonies, according to accredited experts. However, Mr Higgins claims to have other advice, not disclosed, which disputes the damage about to be inflicted on our wildlife. Nobody would deny that building roads is a difficult business when there are so many stakeholders involved. And yet it is truly remarkable how the RMS, despite whatever ‘community consultation’ may have taken place, always does what it wants to do, regardless of public opinion or scientific evidence. The brute fact is that the colossal assembly of men, machinery and materials needed to build roads means that a handful of large companies acquire enormous wealth in the process. And in allocating these expensive projects to large companies bureaucrats acquire enormous power. Neither wealth nor power likes to be restrained. The NSW government has not reined in the appalling arrogance of the RMS, and so the Blackwall Range koalas are set for extinction within the next two or three decades. The only recourse left is with the federal government, if the Department of the Environment is prepared to make a decision based on long-term conservation science rather than short-term bureaucratic convenience. Please ask minister for the environment Greg Hunt to intervene on behalf of the koalas. It is hardly believable that such a request should need to be made. Roads come and go, extinction is forever. The minister’s email is Greg.Hunt.MP@aph.gov.au. David Lovejoy

ast month, in a tone which might best be called unlikely insistence, former British prime minister Tony Blair reassured the public that ‘we’ – the UK and United States – ‘have to liberate ourselves from the notion that we caused’ the destabilisation of Iraq by the ISIS insurgency. Well, actually, you did. Let’s go back to the Versailles peace conference at the end of WWI, when Britain – with the agreement of the other western powers – carved the mandate of Iraq out of three former Ottoman provinces. These provinces – Sunni Kurdish, Sunni Arab and Shia Marsh Arab – were about as unwieldy as any other artificial country the imperial powers of Europe cobbled together around the world, and displayed high potential for instability from the beginning. In the 1930s the United States supported unification of the Arabian peninsula under the House of Saud, whose official religion was an ultra-fundamentalist Sunni sect known as Wahhabism (coincidentally shared by the al Qaeda terrorists who attacked the US on 9/11). In 1953, the United States gave powerful impetus to Islamic political fundamentalism by overthrowing Iranian prime minister Mohammad Mossadeq, a secular democratic socialist, restoring the Shah to power. This created a state of affairs in which fundamentalist clerics constituted

the primary opposition to the Shah’s autocracy, leading eventually to the overthrow of the monarchy and establishment of a theocratic regime. Meanwhile, the Eisenhower administration quietly backed still another fundamentalist movement, the Islamic Brotherhood in Egypt, as an alternative to Nasser’s secular socialist model of nationalism.

their own Vietnam was just too delicious an opportunity to pass up. In 1990 the United States – perhaps eager for a ‘splendid little war’ to demonstrate the continuing need for a large ‘defence’ establishment in the post-Cold War era – basically instigated Saddam’s invasion of Kuwait. US ambassador April Glaspie reassured Saddam that the US took little in-

terest in minor affairs like one Arab country invading another. Meanwhile, with US encouragement, Kuwait engaged in practices like slanted oil drilling on the Iraqi border that inevitably goaded Iraq to invade. But despite the devastation of Iraq by massive US air attacks and an ensuing decade of sanctions, Saddam’s dictatorship remained a secular regime where most people paid little attention to sectarian differences. Marriages between Sunnis and Shia were about as unremarkable as marriages between Baptists and Methodists in the US. The one force in the Middle East that most objected to this secularism and sectarian peace was al Qaeda – America’s baby. And by overthrowing Saddam and creating a power vacuum,

the United States did the one thing guaranteed to give al Qaeda an opening in Iraq. After defeating and dissolving the Baathist regime, the Coalition Provisional Authority established a puppet government organised along sectarian lines, with religious sects rather than ideologically oriented parties as the main axis of political division. That kind of divide-and-rule strategy made it a lot easier to auction off the country to Halliburton, see. And ISIS itself? Well, as resistance to Assad in Syria turned into an all-out civil war, the United States and American proxies like the Saudis (you know, that country whose Wahhabi oil aristocracy included Osama Bin Laden) armed anti-Assad rebels – some of which went on to become ISIS, a Sunni fundamentalist group so extreme even al Qaeda disavowed them. So yeah, Tony. You, Bush and Obama – and all the other swine who’ve used the world as their chessboard for the past century – did cause this. All this bloodshed is yours. You own it. Q Kevin Carson is a senior fellow of the Center for a Stateless Society (c4ss.org) and holds the Center’s Karl Hess Chair in Social Theory. Q Mungo MacCallum is still recovering from various medical procedures and we hope to have him back on deck soon. He thanks all for their good wishes.

Invitation to Aboriginal People to Register Interest Health Infrastructure (HI) proposes to develop the Byron Shire Central Hospital at 54 Ewingsdale Road, Ewingsdale, 500 metres to the east of the Ewingsdale Interchange. The proposal consists of the development of a new hospital and ancillary facilities. An Aboriginal cultural heritage assessment will be undertaken for this project and used in undertaking an environmental assessment under the Environmental Planning & Assessment Act 1979. It may result in HI applying for an Aboriginal Heritage Impact Permit (AHIP) under Part 6 of the National Parks and Wildlife Act 1974.

In accordance with NSW Government guidelines, HI invites Aboriginal people and or Aboriginal groups to register who hold cultural knowledge relevant to determining the signiﬁcance of Aboriginal objects(s) and or place(s) relating to the proposed project area. Registrations from Aboriginal people and or Aboriginal groups wishing to be consulted must be received by phone or in writing by Friday 15th August 2014. To register your interest, please contact: Rod Bennison at Advitech Environmental PO Box 207 Mayﬁeld NSW 2304 Phone: 02 4924 5400; Fax: 02 4967 3772