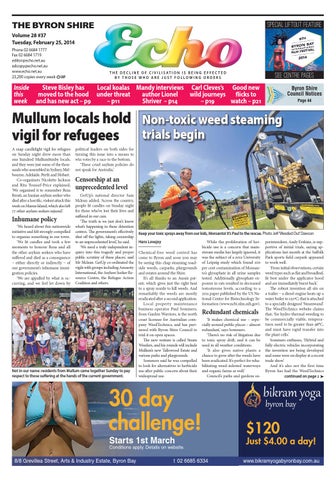 Mullum locals hold Non-toxic weed steaming vigil for refugees trials begin A snap candlelight vigil for refugees on Sunday night drew more than one hundred Mullumbimby locals, and they were just some of the thousands who assembled in Sydney, Melbourne, Adelaide, Perth and Hobart. Co-organisers Nicolette Jackson and Rita Youssef-Price explained, ‘We organised it to remember Reza Berati, an Iranian asylum seeker who died after a horrific, violent attack this week on Manus Island, which also left 77 other asylum seekers injured.’

Inhumane policy ‘We heard about this nationwide initiative and felt strongly compelled to organise something in our town. ‘We lit candles and took a few moments to honour Reza and all the other asylum seekers who have suffered and died as a consequence – either directly or indirectly – of our government’s inhumane immigration policies. ‘We are appalled by what is occurring, and we feel let down by

political leaders on both sides for turning this issue into a means to win votes by a race to the bottom. ‘These cruel asylum policies do not speak for Australia.’

Censorship at an unprecedented level GetUp’s national director Sam Mclean added, ‘Across the country, people lit candles on Sunday night for those who’ve lost their lives and suffered in our care. ‘The truth is we just don’t know what’s happening in these detention centres. The government’s effectively shut off the lights, taking censorship to an unprecedented level,’ he said. ‘We need a truly independent inquiry into this tragedy and proper public scrutiny of these places,’ said Mr Mclean. GetUp co-ordinated the vigils with groups including Amnesty International, the Asylum Seeker Resource Centre, the Refugee Action Coalition and others.

Not in our name: residents from Mullum came together Sunday to pay respect to those suffering at the hands of the current government.

Keep your toxic sprays away from our kids, Monsanto! It’s Paul to the rescue. Photo Jeff ‘Weeded Out’ Dawson Hans Lovejoy

Chemical-free weed control has come to Byron and soon you may be seeing this chap steaming roadside weeds, carparks, playgrounds and estates around the Shire. It’s all thanks to an Aussie patent, which gives just the right heat to a spray nozzle to kill weeds. And remarkably the weeds are mostly eradicated after a second application. Local property maintenance business operator Paul Sommers, from Garden Warriors, is the north coast licensee for Australian company WeedTechnics, and has partnered with Byron Shire Council to trial it on open spaces. The new venture is called Steam Weeders, and his rounds will include Mullum’s new Tallowood Estate and various parks and playgrounds. Sommers said he was compelled to look for alternatives to herbicide use after public concern about their widespread use.

While the proliferation of herbicide use is a concern that mainstream media has largely ignored, it was the subject of a 2012 University of Leipzig study which found 100 per cent contamination of Monsanto’s glysophate in all urine samples tested. Additionally glysophate exposure in rats resulted in decreased testosterone levels, according to a 2011 paper published by the US National Center for Biotechnology Information (www.ncbi.nlm.nih.gov).

Redundant chemicals ‘It makes chemical use – especially around public places – almost redundant,’ says Sommers. ‘There’s no risk of litigation due to toxic spray drift, and it can be used in all weather conditions. ‘It also gives native plants a chance to grow after the weeds have been eradicated. It’s perfect for rehabilitating weed-infested waterways and organic farms as well.’ Council’s parks and gardens su-

perintendent, Andy Erskine, is supportive of initial trials, saying applications last month at the Suffolk Park sports field carpark appeared to work well. ‘From initial observations, certain weed types such as flat and broadleaf, fit best under the applicator hood and are immediately burnt back.’ The robust invention all sits on a trailer – a diesel engine heats up a water boiler to 120ºC; that is attached to a specially designed ‘Steamwand’. The WeedTechnics website claims that, ‘for hydro-thermal weeding to be commercially viable, temperatures need to be greater than 98°C, and must have rapid transfer into the plant cells.’ Sommers enthuses, ‘Hybrid and fully electric vehicles incorporating the invention are being developed and some were on display at a recent trade show.’ And it’s also not the first time Byron has had the WeedTechnics continued on page 2