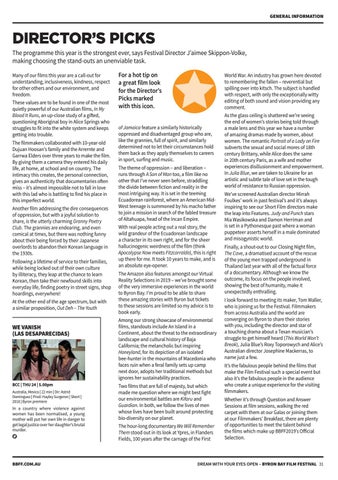 DIRECTOR’S PICKS The programme this year is the strongest ever, says Festival Director J’aimee Skippon-Volke, making choosing the stand-outs an unenviable task. Many of our films this year are a call-out for understanding, inclusiveness, kindness, respect for other others and our environment, and freedom. These values are to be found in one of the most quietly powerful of our Australian films, In My Blood It Runs, an up-close study of a gifted, questioning Aboriginal boy in Alice Springs who struggles to fit into the white system and keeps getting into trouble. The filmmakers collaborated with 10-year-old Dujuan Hoosan’s family and the Arrernte and Garrwa Elders over three years to make the film. By giving them a camera they entered his daily life, at home, at school and on country. The intimacy this creates, the personal connection, gives an authenticity that documentaries often miss – it’s almost impossible not to fall in love with this lad who is battling to find his place in this imperfect world. Another film addressing the dire consequences of oppression, but with a joyful solution to share, is the utterly charming Granny Poetry Club. The grannies are endearing, and even comical at times, but there was nothing funny about their being forced by their Japanese overlords to abandon their Korean language in the 1930s. Following a lifetime of service to their families, while being locked out of their own culture by illiteracy, they leap at the chance to learn Korean, then take their newfound skills into everyday life, finding poetry in street signs, shop hoardings, everywhere! At the other end of the age spectrum, but with a similar proposition, Out Deh – The Youth

In a country where violence against women has been normalised, a young mother will put her own life in danger to get legal justice over her daughter’s brutal murder.

For a hot tip on a great film look for the Director’s Picks marked with this icon. of Jamaica feature a similarly historically oppressed and disadvantaged group who are, like the grannies, full of spirit, and similarly determined not to let their circumstances hold them back as they apply themselves to careers in sport, surfing and music. The theme of oppression – and liberation – runs through A Son of Man too, a film like no other that I’ve never seen before, straddling the divide between fiction and reality in the most intriguing way. It is set in the teeming Ecuadorean rainforest, where an American MidWest teenage is summoned by his macho father to join a mission in search of the fabled treasure of Altahuapa, head of the Incan Empire. With real people acting out a real story, the wild grandeur of the Ecuadorean landscape a character in its own right, and for the sheer hallucinogenic weirdness of the film (think Apocalypse Now meets Fitzcarraldo), this is right up there for me. It took 10 years to make, and is an absolute eye-opener. The Amazon also features amongst our Virtual Reality Selections in 2019 – we’ve brought some of the very immersive experiences in the world to Byron Bay. I’m proud to be able to share these amazing stories with Byron but tickets to these sessions are limited so my advice is to book early. Among our strong showcase of environmental films, standouts include An Island in a Continent, about the threat to the extraordinary landscape and cultural history of Baja California; the melancholic but inspiring Honeyland, for its depiction of an isolated bee-hunter in the mountains of Macedonia who faces ruin when a feral family sets up camp next door, adopts her traditional methods but ignores her sustainability practices. Two films that are full of majesty, but which made me question where we might best fight our environmental battles are Kifaru and Guardian. In both, we follow the lives of men whose lives have been built around protecting bio-diversity on our planet. The hour-long documentary We Will Remember Them stood out in its look at Ypres, in Flanders Fields, 100 years after the carnage of the First

World War. An industry has grown here devoted to remembering the fallen – reverential but spilling over into kitsch. The subject is handled with respect, with only the exceptionally witty editing of both sound and vision providing any comment. As the glass ceiling is shattered we’re seeing the end of women’s stories being told through a male lens and this year we have a number of amazing dramas made by women, about women. The romantic Portrait of a Lady on Fire subverts the sexual and social mores of 18th century Brittany, while Alice does the same in 20th century Paris, as a wife and mother experiences disillusionment and empowerment. In Julia Blue, we are taken to Ukraine for an artistic and subtle tale of love set in the tough world of resistance to Russian oppression. We’ve screened Australian director Mirrah Foulkes’ work in past festival’s and it’s always inspiring to see our Short Film directors make the leap into Features. Judy and Punch stars Mia Wasikowska and Damon Herriman and is set in a Pythonesque past where a woman puppeteer asserts herself in a male dominated and misogynistic world. Finally, a shout-out to our Closing Night film, The Cave, a dramatised account of the rescue of the young men trapped underground in Thailand last year with all of the factual force of a documentary. Although we know the outcome, its focus on the people involved, showing the best of humanity, make it unexpectedly enthralling. I look forward to meeting its maker, Tom Waller, who is joining us for the Festival. Filmmakers from across Australia and the world are converging on Byron to share their stories with you, including the director and star of a touching drama about a Texan musician’s struggle to get himself heard (This World Won’t Break), Julia Blue’s Roxy Toporowych and Alice’s Australian director Josephine Mackerras, to name just a few. It’s the fabulous people behind the films that make the Film Festival such a special event but also it’s the fabulous people in the audience who create a unique experience for the visiting filmmakers. Whether it’s through Question and Answer Sessions at film sessions, walking the red carpet with them at our Galas or joining them at our Filmmakers’ Breakfast, there are plenty of opportunities to meet the talent behind the films which make up BBFF2019’s Official Selection.