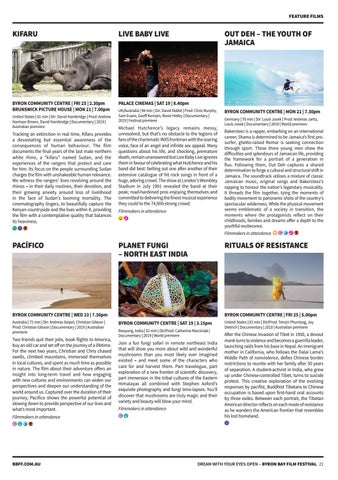 Tracking an extinction in real time, Kifaru provides a devastating but essential awareness of the consequences of human behaviour. The film documents the final years of the last male northern white rhino, a “kifaru” named Sudan, and the experiences of the rangers that protect and care for him. Its focus on the people surrounding Sudan charges the film with unshakeable human relevance. We witness the rangers’ lives revolving around the rhinos – in their daily routines, their devotion, and their growing anxiety around loss of livelihood in the face of Sudan’s looming mortality. The cinematography lingers, to beautifully capture the Kenyan countryside and the lives within it, providing the film with a contemplative quality that balances its heaviness.

OUT DEH – THE YOUTH OF JAMAICA

Michael Hutchence’s legacy remains messy, unresolved, but that’s no obstacle to the legions of fans of the charismatic INXS frontman with the soaring voice, face of an angel and infinite sex appeal. Many questions about his life, and shocking, premature death, remain unanswered but Live Baby Live ignores them in favour of celebrating what Hutchence and his band did best: belting out one after another of their extensive catalogue of hit rock songs in front of a huge, adoring crowd. The show at London’s Wembley Stadium in July 1991 revealed the band at their peak; road-hardened pros enjoying themselves and committed to delivering the finest musical experience they could to the 74,000-strong crowd. Filmmakers in attendance

Bakersteez is a rapper, embarking on an international career; Shama is determined to be Jamaica’s first prosurfer; ghetto-raised Romar is seeking connection through sport. These three young men show the difficulties and splendours of Jamaican life, providing the framework for a portrait of a generation in flux. Following them, Out Deh captures a shared determination to forge a cultural and structural shift in Jamaica. The soundtrack utilises a mixture of classic Jamaican music, original songs and Bakersteez’s rapping to honour the nation’s legendary musicality. It threads the film together, tying the moments of bodily movement to panoramic shots of the country’s spectacular wilderness. While the physical movement seems emblematic of a society in transition, the moments where the protagonists reflect on their childhoods, families and dreams offer a depth to the youthful exuberance. Filmmakers in attendance

Two friends quit their jobs, book flights to America, buy an old car and set off on the journey of a lifetime. For the next two years, Christian and Chris chased swells, climbed mountains, immersed themselves in local cultures, and spent as much time as possible in nature. The film about their adventure offers an insight into long-term travel and how engaging with new cultures and environments can widen our perspectives and deepen our understanding of the world around us. Captured over the duration of their journey, Pacífico shows the powerful potential of slowing down to provide perspective of our lives and what’s most important. Filmmakers in attendance

Join a fun fungi safari in remote northeast India that will show you more about wild and wonderful mushrooms than you most likely ever imagined existed – and meet some of the characters who care for and harvest them. Part travelogue, part exploration of a new frontier of scientific discovery, part immersion in the tribal cultures of the Eastern Himalayas all combined with Stephen Axford’s exquisite photography and fungi time-lapses. You’ll discover that mushrooms are truly magic and their variety and beauty will blow your mind. Filmmakers in attendance

After the Chinese invasion of Tibet in 1950, a devout monk turns to violence and becomes a guerrilla leader, launching raids from his base in Nepal. An immigrant mother in California, who follows the Dalai Lama’s Middle Path of nonviolence, defies Chinese border restrictions to reunite with her family after 30 years of separation. A student-activist in India, who grew up under Chinese-controlled Tibet, turns to suicide protest. This creative exploration of the evolving responses by pacifist, Buddhist Tibetans to Chinese occupation is based upon first-hand oral accounts by three exiles. Between each portrait, the Tibetan American director reflects on each mode of resistance as he wanders the American frontier that resembles his lost homeland.