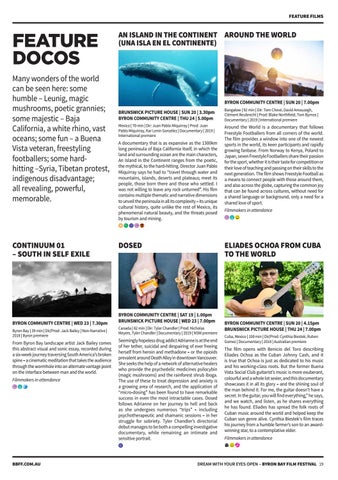 CONTINUUM 01 – SOUTH IN SELF EXILE

From Byron Bay landscape artist Jack Bailey comes this abstract visual and sonic essay, recorded during a six-week journey traversing South America’s broken spine – a cinematic meditation that takes the audience through the wormhole into an alternate vantage point on the interface between man and the world. Filmmakers in attendance

Around the World is a documentary that follows Freestyle Footballers from all corners of the world. The film provides a window into one of the newest sports in the world, its keen participants and rapidly growing fanbase. From Norway to Kenya, Poland to Japan, seven Freestyle Footballers share their passion for the sport, whether it is their taste for competition or their love of teaching and passing on their skills to the next generation. The film shows Freestyle Football as a means to connect people with those around them, and also across the globe, capturing the common joy that can be found across cultures, without need for a shared language or background, only a need for a shared love of sport.

A documentary that is as expansive as the 1300km long peninsula of Baja California itself, in which the land and surrounding ocean are the main characters, An Island in the Continent ranges from the poetic, the mythical, to the hard-hitting. Director Juan Pablo Miquirray says he had to “travel through water and mountains, islands, deserts and plateaus; meet its people, those born there and those who settled. I was not willing to leave any rock unturned”. His film contains multiple thematic and narrative dimensions to unveil the peninsula in all its complexity – its unique cultural history, quite unlike the rest of Mexico, its phenomenal natural beauty, and the threats posed by tourism and mining.

ELIADES OCHOA FROM CUBA TO THE WORLD

Seemingly hopeless drug addict Adrianne is at the end of her tether, suicidal and despairing of ever freeing herself from heroin and methadone – or the opioids prevalent around Death Alley in downtown Vancouver. She seeks the help of a network of alternative healers who provide the psychedelic medicines psilocybin (magic mushrooms) and the rainforest shrub iboga. The use of these to treat depression and anxiety is a growing area of research, and the application of “micro-dosing” has been found to have remarkable success in even the most intractable cases. Dosed follows Adrianne on her journey to hell and back as she undergoes numerous “trips” – including psychotherapeutic and shamanic sessions – in her struggle for sobriety. Tyler Chandler’s directorial debut manages to be both a compelling investigative documentary, while remaining an intimate and sensitive portrait.

The film opens with Benicio del Toro describing Eliades Ochoa as the Cuban Johnny Cash, and it is true that Ochoa is just as dedicated to his music and his working-class roots. But the former Buena Vista Social Club guitarist’s music is more exuberant, colourful and a whole lot sexier, and this documentary showcases it in all its glory – and the shining soul of the man behind it. For me, the guitar doesn’t have a secret. In the guitar, you will find everything,” he says, and we watch, and listen, as he shares everything he has found. Eliades has spread the folk roots of Cuban music around the world and helped keep the Cuban son genre alive. Cynthia Biestek‘s film traces his journey from a humble farmer’s son to an awardwinning star, to a contemplative elder. Filmmakers in attendance