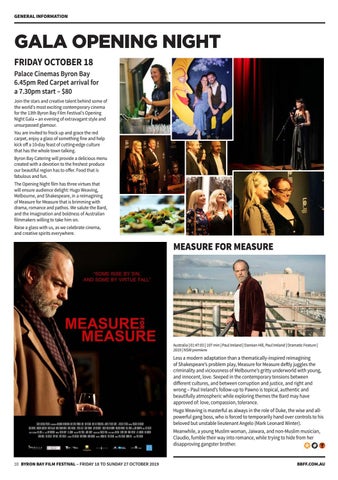 Palace Cinemas Byron Bay 6.45pm Red Carpet arrival for a 7.30pm start – $80 Join the stars and creative talent behind some of the world’s most exciting contemporary cinema for the 13th Byron Bay Film Festival’s Opening Night Gala – an evening of extravagant style and unsurpassed glamour. You are invited to frock up and grace the red carpet, enjoy a glass of something fine and help kick off a 10-day feast of cutting-edge culture that has the whole town talking. Byron Bay Catering will provide a delicious menu created with a devotion to the freshest produce our beautiful region has to offer. Food that is fabulous and fun. The Opening Night film has three virtues that will ensure audience delight: Hugo Weaving, Melbourne, and Shakespeare, in a reimagining of Measure for Measure that is brimming with drama, romance and pathos. We salute the Bard, and the imagination and boldness of Australian filmmakers willing to take him on. Raise a glass with us, as we celebrate cinema, and creative spirits everywhere.

Less a modern adaptation than a thematically-inspired reimagining of Shakespeare’s problem play, Measure for Measure deftly juggles the criminality and viciousness of Melbourne’s gritty underworld with young, and innocent, love. Seeped in the contemporary tensions between different cultures, and between corruption and justice, and right and wrong – Paul Ireland’s follow-up to Pawno is topical, authentic and beautifully atmospheric while exploring themes the Bard may have approved of: love, compassion, tolerance. Hugo Weaving is masterful as always in the role of Duke, the wise and allpowerful gang boss, who is forced to temporarily hand over controls to his beloved but unstable lieutenant Angelo (Mark Leonard Winter). Meanwhile, a young Muslim woman, Jaiwara, and non-Muslim musician, Claudio, fumble their way into romance, while trying to hide from her disapproving gangster brother. 10 BYRON BAY FILM FESTIVAL – FRIDAY 18 TO SUNDAY 27 OCTOBER 2019BBFF.COM.AU