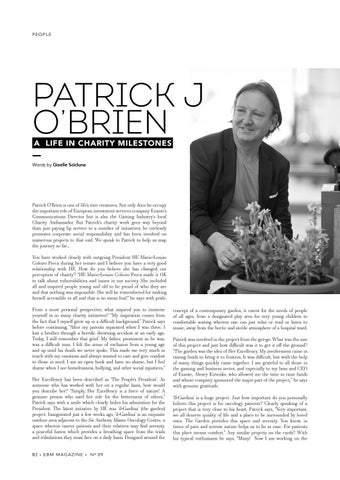 Patrick O’Brien is one of life’s rare creatures. Not only does he occupy the important role of European investment services company Exante’s Communications Director but is also the Gaming Industry’s local Charity Ambassador. But Patrick’s charity work goes way beyond than just paying lip service to a number of initiatives; he tirelessly promotes corporate social responsibility and has been involved on numerous projects to that end. We speak to Patrick to help us map the journey so far… You have worked closely with outgoing President HE Marie-Louise Coleiro Preca during her tenure and I believe you have a very good relationship with HE. How do you believe she has changed our perception of charity? “HE Marie-Louise Coleiro Preca made it OK to talk about vulnerabilities and issues in our society. She included all and inspired people young and old to be proud of who they are and that nothing was impossible. She will be remembered for making herself accessible to all and that is no mean feat!” he says with pride. From a more personal perspective; what inspired you to immerse yourself in so many charity initiatives? “My inspiration comes from the fact that I myself grew up in a difficult background,” Patrick says before continuing, “After my parents separated when I was three, I lost a brother through a horrific drowning accident at an early age. Today, I still remember that grief. My father, prominent as he was, was a difficult man. I felt the sense of exclusion from a young age and up until his death we never spoke. This made me very much in touch with my emotions and always wanted to care and give comfort to those in need. I am an open book and have no shame, but I feel shame when I see homelessness, bullying, and other social injustices.” Her Excellency has been described as ‘The People’s President’. As someone who has worked with her on a regular basis, how would you describe her? “Simply, Her Excellency is a force of nature! A genuine person who used her role for the betterment of others,” Patrick says with a smile which clearly belies his admiration for the President. The latest initiative by HE was ‘il-Gardina’ (the garden) project. Inaugurated just a few weeks ago, ‘il-Gardina’ is an exquisite outdoor area adjacent to the Sir Anthony Mamo Oncology Centre, a space wherein cancer patients and their relatives may find serenity, a peaceful haven which provides a breathing space from the trials and tribulations they must face on a daily basis. Designed around the 82 - EBM MAGAZINE - No 09

concept of a contemporary garden, it caters for the needs of people of all ages, from a designated play area for very young children to comfortable seating wherein one can just relax or read or listen to music, away from the hectic and sterile atmosphere of a hospital ward. Patrick was involved in the project from the get-go. What was the aim of this project and just how difficult was it to get it off the ground? “The garden was the idea of Her Excellency. My involvement came in raising funds to bring it to fruition. It was difficult, but with the help of many, things quickly came together. I am grateful to all those in the gaming and business sector, and especially to my boss and CEO of Exante, Alexey Kirienko, who allowed me the time to raise funds and whose company sponsored the major part of the project,” he says with genuine gratitude. ‘Il-Gardina’ is a huge project. Just how important do you personally believe this project is for oncology patients? Clearly speaking of a project that is very close to his heart, Patrick says, “Very important, we all deserve quality of life and a place to be surrounded by loved ones. The Garden provides this space and serenity. You know, in times of pain and sorrow, nature helps us to be at ease. For patients this place means comfort.” Any similar projects on the cards? With his typical enthusiasm he says, “Many! Now I am working on the 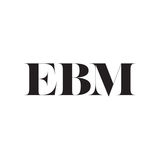