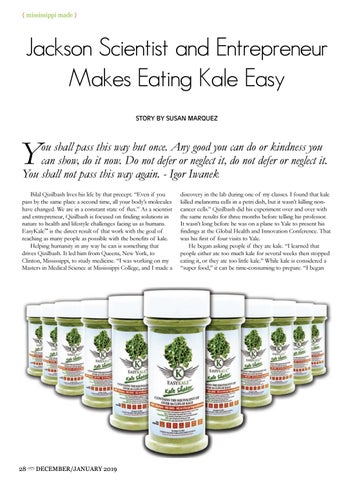 Bilal Qizilbash lives his life by that precept. “Even if you pass by the same place a second time, all your body’s molecules have changed. We are in a constant state of flux.” As a scientist and entrepreneur, Qizilbash is focused on finding solutions in nature to health and lifestyle challenges facing us as humans. EasyKale™ is the direct result of that work with the goal of reaching as many people as possible with the benefits of kale. Helping humanity in any way he can is something that drives Qizilbash. It led him from Queens, New York, to Clinton, Mississippi, to study medicine. “I was working on my Masters in Medical Science at Mississippi College, and I made a

discovery in the lab during one of my classes. I found that kale killed melanoma cells in a petri dish, but it wasn’t killing noncancer cells.” Qizilbash did his experiment over and over with the same results for three months before telling his professor. It wasn’t long before he was on a plane to Yale to present his findings at the Global Health and Innovation Conference. That was his first of four visits to Yale. He began asking people if they ate kale. “I learned that people either ate too much kale for several weeks then stopped eating it, or they ate too little kale.” While kale is considered a “super food,” it can be time-consuming to prepare. “I began 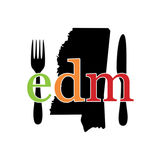