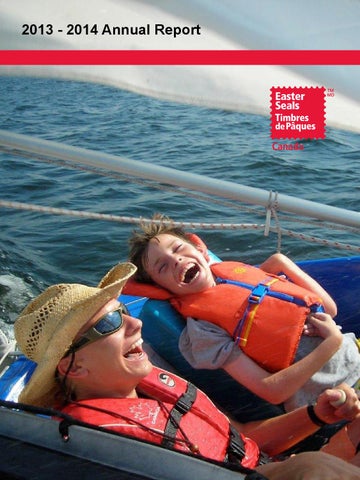 This page was intentionally left blank.

Letter from the Chair and the President / CEO Access 2 Program

Friends of We Care

Board of Directors and National Office Staff Provincial Members

Letter from the Chair &amp; the President/CEO To members, sponsors and all supporters of Easter Seals Canada, There have been significant changes in governance for Easter Seals Canada this year. Most important, we successfully completed registration for Continuance under the new Canada Not-for-Profit Corporations Act. In the process of preparing for this the organization undertook a comprehensive review of our governance structures and bylaws. These have now all been duly registered with Industry Canada and Canada Revenue Agency and they are being implemented within Easter Seals. As part of this process the Board has continued to look for ways to make meetings more efficient and ways to use more electronic communications and document management. All of this has improved efficiency and reduced costs. As Chair of Easter Seals Canada, I am particularly proud of the strong continuing support from major sponsors such as Canada Safeway, Century 21, Cineplex, CREIT, Amway, Red Apple Stores, Booster Juice. And a special thank you to the Friends of We Care who over the years have raised millions of dollars to support sending Easter Seals Kids to Camp though their fundraising efforts with the food services industry. I am pleased that working relationships with our Easter Seals partners in the United States, Mexico and Australia have continued to flourish and we look forward to more sharing of experiences and program ideas. The key strength of Easter Seals Canada is the diverse range of services offered by provincial Easter Seals Member organizations in every province of Canada. In each province programs are specifically tailored to meet the needs and unique circumstances of that province ensuring that services are targeted and focused on local needs. As I near the end of my term of office, I wish to thank our strong and committed Board of Directors for their leadership. Special thanks to our dedicated national office staff and to each and every Provincial Member organization for their steadfast support for the work of the national organization.

Doug Surtees Chair, Board of Directors

The past few years have been challenging for Easter Seals Canada. After several very successful years of building new sponsorship revenues, the rate of growth has slowed. Like many organizations, we have faced challenges retaining skilled staff to lead our fundraising programs. With the support of the CEO Committee the organization has determined that expanding and enhancing awareness of the Easter Seals brand and fundraising must be the key priorities for the next few years. Accordingly, we developed a new fundraising plan of action and with the assistant of SearchSmart we recruited a more senior fundraising professional to lead this development over the next decade. Easter Seals Canada is pleased to welcome Lisa McKeen as the new VP of Development. Working closely with provincial staff, Lisa has undertaken a total revamp of our brand and marketing materials. She has created vibrant PSAâ&amp;#x20AC;&amp;#x2122;s and other marketing supports. We have introduced a new umbrella approach to highlighting our services to young children called Make the First Five Count and have been building support for this program both with Provincial members and with key financial supporters. We have also begun work on updating our Ambassador program, looking for ways to engage our youth spokespersons at the national level and with key corporate supporters. Easter Seals Canada has for the past decade operated a very successful Access 2 Entertainment Program in co-operation with Cineplex, most other movie theatres in Canada, and a broad array of arts and entertainment venues. The program enables persons with disabilities, who require an attendant, to attend movies or other entertainment activities without having to pay an extra admission for their attendant or caregiver. Our surveys have confirmed that over 86% of the Access 2 Card holders report that the card has enabled them to get out to more events and be more active in the community. This program is now totally self-supporting. This year we are beginning preparations for the 10th anniversary celebrations and look forward to issuing the 60,000th Access 2 Card. Max Beck President &amp; Chief Executive Officer

A Transformational Year for Access 2! It was an exciting and transformational year for the Access 2 Program! The card that gives people who require an attendant, improved access to entertainment rebranded to better reflect its scope. After nine years, Access 2 Entertainment became the Access 2 Program, offering people with disabilities better access to cultural, recreational and tourist attractions. During the 2013-2014 year alone, Access 2 cards were accepted in 39 additional venues, including Ripleyâ&amp;#x20AC;&amp;#x2122;s Aquarium in Toronto and the City of Penticton making the total number of participant venues 223.

Easter Seals also introduced bilingual Access 2 Cards and celebrated when the program surpassed 50,000 cards issued! Easter Seals is committed to breaking down barriers for people living with disabilities. Before Access 2, people who require an attendant often had to pay twice to access entertainment and recreational events. Since 2004, Easters Sealsâ&amp;#x20AC;&amp;#x2122; Access 2 Program has worked with Cineplex Entertainment and other cultural attractions across Canada to break down these types of barriers so people with disabilities can enjoy what our cities have to offer. In addition to accepting one fare for a person and their attendant, Access 2 raises awareness and helps businesses provide quality customer service to patrons with disabilities.

Easter Seals Paper Egg Campaign It’s amazing what a small act can do. Buying a $2 paper egg doesn’t sound like much, until you see hundreds of paper eggs hanging on the store wall with the names of the people who bought them. Imagine hundreds of store walls just like that one across the country. In 2013, all those paper eggs amounted to close to $800,000 in support of provincial Easter Seals programs and services. The Easter Seals Paper Egg campaign, which began in 2000, launched during “March is Easter Seals month.” National Sponsor, Red Apple Stores Inc. has been the Paper Egg’s top fundraising sponsor since the campaign began, raising more than $1 million overall since 2007! National Sponsor, Booster Juice celebrated a record breaking year, raising $65,000! That brings the total raised since they started four years ago to more than $200,000! In addition to the national sponsors, regional and local retail businesses also participated. Paper Egg sales support Easter Seals programs and services that include active living opportunities and the provision of mobility and adaptive equipment for Canadians with disabilities. Small acts can make all the difference in the world!

Friends of We Care Friends of We Care is a friend indeed. Its network of member companies, representing all facets of the Food and Hospitality industry, has been raising funds to send kids with disabilities to Easter Seals camp for more than 25 years. This year, Friends of We Careâ&amp;#x20AC;&amp;#x2122;s hard working volunteers raised $1,039,485 - a 24 per cent increase from the year before, offering hundreds of kids with disabilities transformational opportunities! Volunteers raise funds through a number of special events conducted with the support of 84 Member Sponsors representing manufacturers, distributors, operators, brokers, cold storage, management, marketing, and transport companies. Through its long-time commitment and generous annual gifts, Friends of We Care is the largest corporate contributor to Easter Seals Canada and the summer camp programs across Canada.

Century 21 Kids to Camp In 2013, Century 21 realtors celebrated a major fundraising milestone. Together they broke the half million mark in dollars raised for Easter Seals kids. This was enough to send more than 240 kids to Easter Sealsâ&amp;#x20AC;&amp;#x2122; transformational summer camps! Top fundraisers included CENTURY 21 Dome Realty Inc., with $83,462 raised, CENTURY 21 B.J. Roth Realty Ltd. at $77,500 and CENTURY 21 Assurance Realty Ltd. at $49,642. For more than 30 years Century 21 Real Estate Professionals have been supporting Canadian children living with disability. In 2009, Century 21 &amp; Easter Seals Canada introduced the Kids to Camp program, which invites Century 21 realtors to help make a difference through a range of fundraising activities in support of Easter Seals summer camp programs. One program is Closing Gifts for Kids where Realtors donate $21 for every closed transaction they make over the course of the year.

Canada Safeway In five provinces Safeway staff and customers raised an astonishing $1,216,280 for Easter Seals summer camp programs during its Safeway Spring campaign in April 2013! During the campaign, Safeway customers were invited to make a donation of $2 at any Safeway store and receive five Air Miles reward miles. At select stores, shoppers were met by cheerful Easter Seals staff, volunteers and ambassadors who thanked them for their support. All Safeway stores in the four western provinces and Eastern Ontario participated in the campaign. Caring about the community is a Safeway tradition that began with the opening of its first Canadian stores in 1929. Safeway and its 30,000 Canadian employees share a passion for supporting the people and communities they share. Thank you Safeway Canada, and customers, for providing unforgettable summer memories for thousands of kids!

During the summer of 2013, more than 750 Canadians transformed themselves into superheroes. They donned the outfits of their favourite comic book heroes - plus rappelling attire - to take one small step off an office tower, and one giant leap for young Canadians with disabilities. Collectively they raised $1,544,548! Local businesses helped out too, generously offering $1,209,984 in gifts in kind to offset event costs. In addition to the $265,311 donated by national sponsors, CREIT and Amway and local sponsors, the Drop Zone raised $1.8 million for Easter Sealsâ&amp;#x20AC;&amp;#x2122; famed active living programs! Just as these programs, which include Easter Seals summer camps, encourage kids with disabilities to get out of their comfort zones to explore their extraordinary abilities, the Easter Seals Drop Zone encourages its participants to do the same. The results are unforgettable experiences and memories all around.

Thank You! A big thank you to all of our national partners and sponsors. Without you we would not be able to provide the Canadian disabled community with programs and services that truly change the quality of their lives. You are all heroes.

Surplus of revenue over expenses 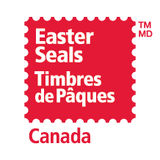