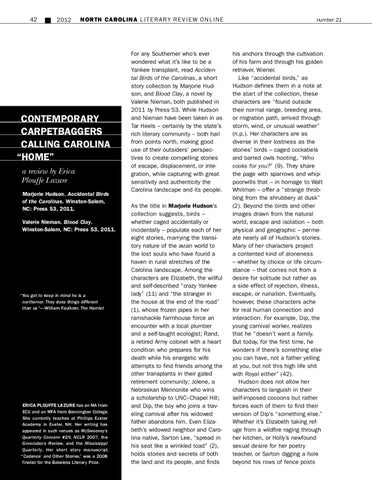 “You got to keep in mind he is a northerner. They does things different than us.”—William Faulkner, The Hamlet

Erica Plouffe Lazure has an MA from ECU and an MFA from Bennington College. She currently teaches at Phillips Exeter Academy in Exeter, NH. Her writing has appeared in such venues as McSweeney’s Quarterly Concern #29, NCLR 2007, the Greensboro Review, and the Mississippi Quarterly. Her short story manuscript, “‘Cadence’ and Other Stories,” was a 2008 finalist for the Bakeless Literary Prize.

For any Southerner who’s ever wondered what it’s like to be a Yankee transplant, read Accidental Birds of the Carolinas, a short story collection by Marjorie Hudson, and Blood Clay, a novel by Valerie Nieman, both published in 2011 by Press 53. While Hudson and Nieman have been taken in as Tar Heels – certainly by the state’s rich literary community – both hail from points north, making good use of their outsiders’ perspectives to create compelling stories of escape, displacement, or integration, while capturing with great sensitivity and authenticity the Carolina landscape and its people. As the title in Marjorie Hudson’s collection suggests, birds – whether caged accidentally or incidentally – populate each of her eight stories, marrying the transitory nature of the avian world to the lost souls who have found a haven in rural stretches of the Carolina landscape. Among the characters are Elizabeth, the willful and self-described “crazy Yankee lady” (11) and “the stranger in the house at the end of the road” (1), whose frozen pipes in her ramshackle farmhouse force an encounter with a local plumber and a self-taught ecologist; Rand, a retired Army colonel with a heart condition who prepares for his death while his energetic wife attempts to find friends among the other transplants in their gated retirement community; Jolene, a Nebraskan Mennonite who wins a scholarship to UNC–Chapel Hill; and Dip, the boy who joins a traveling carnival after his widowed father abandons him. Even Elizabeth’s widowed neighbor and Carolina native, Sarton Lee, “spread in his seat like a wrinkled toad” (2), holds stories and secrets of both the land and its people, and finds

his anchors through the cultivation of his farm and through his golden retriever, Wiener. Like “accidental birds,” as Hudson defines them in a note at the start of the collection, these characters are “found outside their normal range, breeding area, or migration path, arrived through storm, wind, or unusual weather” (n.p.). Her characters are as diverse in their lostness as the stories’ birds – caged cockatiels and barred owls hooting, “Who cooks for you?” (9). They share the page with sparrows and whippoorwills that – in homage to Walt Whitman – offer a “strange throbbing from the shrubbery at dusk” (2). Beyond the birds and other images drawn from the natural world, escape and isolation – both physical and geographic – permeate nearly all of Hudson’s stories. Many of her characters project a contented kind of aloneness – whether by choice or life circumstance – that comes not from a desire for solitude but rather as a side effect of rejection, illness, escape, or ruination. Eventually, however, these characters ache for real human connection and interaction. For example, Dip, the young carnival worker, realizes that he “doesn’t want a family. But today, for the first time, he wonders if there’s something else you can have, not a father yelling at you, but not this high life shit with Royal either” (42). Hudson does not allow her characters to languish in their self-imposed cocoons but rather forces each of them to find their version of Dip’s “something else.” Whether it’s Elizabeth taking refuge from a wildfire raging through her kitchen, or Holly’s newfound sexual desire for her poetry teacher, or Sarton digging a hole beyond his rows of fence posts

NCLR Online is an open-access supplement to the award-winning North Carolina Literary Review. Beginning in 2012, the book reviews and literary news that used to appear in our annual print issue will now be published in the electronic issue, along with some content related to the year’s special feature topic. Providing book reviews to as broad an audience as possible helps to fulfill NCLR’s mission to serve as ambassador for North Carolina writers. Now writers can link our reviews and award stories to their websites and Facebook pages. And drawing attention to the annual special feature topic in advance of publication will give readers time to subscribe before the summer mailing of the print issue.