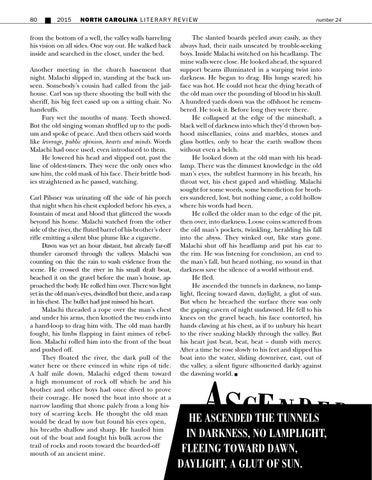 from the bottom of a well, the valley walls barreling his vision on all sides. One way out. He walked back inside and searched in the closet, under the bed. Another meeting in the church basement that night. Malachi slipped in, standing at the back unseen. Somebody’s cousin had called from the jailhouse. Carl was up there shooting the bull with the sheriff, his big feet eased up on a sitting chair. No handcuffs. Fury wet the mouths of many. Teeth showed. But the old singing woman shuffled up to the podium and spoke of peace. And then others said words like leverage, public opinion, hearts and minds. Words Malachi had once used, even introduced to them. He lowered his head and slipped out, past the line of oldest-timers. They were the only ones who saw him, the cold mask of his face. Their brittle bodies straightened as he passed, watching. Carl Pilsner was urinating off the side of his porch that night when his chest exploded before his eyes, a fountain of meat and blood that glittered the woods beyond his home. Malachi watched from the other side of the river, the fluted barrel of his brother’s deer rifle emitting a silent blue plume like a cigarette. Dawn was yet an hour distant, but already far-off thunder caromed through the valleys. Malachi was counting on this: the rain to wash evidence from the scene. He crossed the river in his small draft boat, beached it on the gravel before the man’s house, approached the body. He rolled him over. There was light yet in the old man’s eyes, dwindled but there, and a rasp in his chest. The bullet had just missed his heart. Malachi threaded a rope over the man’s chest and under his arms, then knotted the two ends into a hand-loop to drag him with. The old man hardly fought, his limbs flapping in faint mimes of rebellion. Malachi rolled him into the front of the boat and pushed off. They floated the river, the dark pull of the water here or there evinced in white rips of tide. A half mile down, Malachi edged them toward a high monument of rock off which he and his brother and other boys had once dived to prove their courage. He nosed the boat into shore at a narrow landing that shone palely from a long history of scarring keels. He thought the old man would be dead by now but found his eyes open, his breaths shallow and sharp. He hauled him out of the boat and fought his bulk across the trail of rocks and roots toward the boarded-off mouth of an ancient mine.

The slanted boards peeled away easily, as they always had, their nails unseated by trouble-seeking boys. Inside Malachi switched on his headlamp. The mine walls were close. He looked ahead, the squared support beams illuminated in a warping twist into darkness. He began to drag. His lungs seared; his face was hot. He could not hear the dying breath of the old man over the pounding of blood in his skull. A hundred yards down was the offshoot he remembered. He took it. Before long they were there. He collapsed at the edge of the mineshaft, a black well of darkness into which they’d thrown boyhood miscellanies, coins and marbles, stones and glass bottles, only to hear the earth swallow them without even a belch. He looked down at the old man with his headlamp. There was the dimmest knowledge in the old man’s eyes, the subtlest harmony in his breath, his throat wet, his chest gaped and whistling. Malachi sought for some words, some benediction for brothers sundered, lost, but nothing came, a cold hollow where his words had been. He rolled the older man to the edge of the pit, then over, into darkness. Loose coins scattered from the old man’s pockets, twinkling, heralding his fall into the abyss. They winked out, like stars gone. Malachi shut off his headlamp and put his ear to the rim. He was listening for conclusion, an end to the man’s fall, but heard nothing, no sound in that darkness save the silence of a world without end. He fled. He ascended the tunnels in darkness, no lamplight, fleeing toward dawn, daylight, a glut of sun. But when he breached the surface there was only the gaping cavern of night undawned. He fell to his knees on the gravel beach, his face contorted, his hands clawing at his chest, as if to unbury his heart to the river snaking blackly through the valley. But his heart just beat, beat, beat – dumb with mercy. After a time he rose slowly to his feet and slipped his boat into the water, sliding downriver, east, out of the valley, a silent figure silhouetted darkly against the dawning world. n

HE ASCENDED THE TUNNELS IN DARKNESS, NO LAMPLIGHT, FLEEING TOWARD DAWN, DAYLIGHT, A GLUT OF SUN.