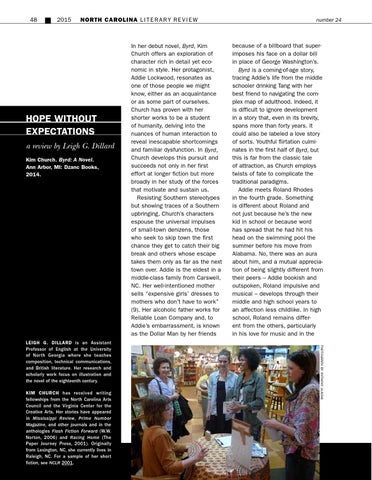 KIM CHURCH has received writing fellowships from the North Carolina Arts Council and the Virginia Center for the Creative Arts. Her stories have appeared in Mississippi Review, Prime Number Magazine, and other journals and in the anthologies Flash Fiction Forward (W.W. Norton, 2006) and Racing Home (The Paper Journey Press, 2001). Originally from Lexington, NC, she currently lives in Raleigh, NC. For a sample of her short fiction, see NCLR 2001.

because of a billboard that superimposes his face on a dollar bill in place of George Washington’s. Byrd is a coming-of-age story, tracing Addie’s life from the middle schooler drinking Tang with her best friend to navigating the complex map of adulthood. Indeed, it is difficult to ignore development in a story that, even in its brevity, spans more than forty years. It could also be labeled a love story of sorts. Youthful flirtation culminates in the first half of Byrd, but this is far from the classic tale of attraction, as Church employs twists of fate to complicate the traditional paradigms. Addie meets Roland Rhodes in the fourth grade. Something is different about Roland and not just because he’s the new kid in school or because word has spread that he had hit his head on the swimming pool the summer before his move from Alabama. No, there was an aura about him, and a mutual appreciation of being slightly different from their peers – Addie bookish and outspoken, Roland impulsive and musical – develops through their middle and high school years to an affection less childlike. In high school, Roland remains different from the others, particularly in his love for music and in the PHOTOGRAPH BY ANTHONY ULINSKI

LEIGH G. DILLARD is an Assistant Professor of English at the University of North Georgia where she teaches composition, technical communications, and British literature. Her research and scholarly work focus on illustration and the novel of the eighteenth century.

In her debut novel, Byrd, Kim Church offers an exploration of character rich in detail yet economic in style. Her protagonist, Addie Lockwood, resonates as one of those people we might know, either as an acquaintance or as some part of ourselves. Church has proven with her shorter works to be a student of humanity, delving into the nuances of human interaction to reveal inescapable shortcomings and familiar dysfunction. In Byrd, Church develops this pursuit and succeeds not only in her first effort at longer fiction but more broadly in her study of the forces that motivate and sustain us. Resisting Southern stereotypes but showing traces of a Southern upbringing, Church’s characters espouse the universal impulses of small-town denizens, those who seek to skip town the first chance they get to catch their big break and others whose escape takes them only as far as the next town over. Addie is the eldest in a middle-class family from Carswell, NC. Her well-intentioned mother sells “expensive girls’ dresses to mothers who don’t have to work” (9). Her alcoholic father works for Reliable Loan Company and, to Addie’s embarrassment, is known as the Dollar Man by her friends