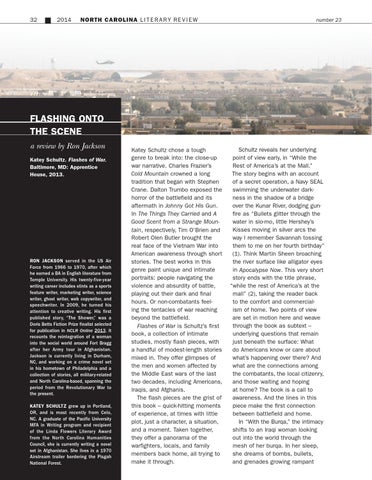 Ron Jackson served in the US Air Force from 1966 to 1970, after which he earned a BA in English literature from Temple University. His twenty-five-year writing career includes stints as a sports feature writer, marketing writer, science writer, ghost writer, web copywriter, and speechwriter. In 2009, he turned his attention to creative writing. His first published story, “The Shower,” was a Doris Betts Fiction Prize finalist selected for publication in NCLR Online 2013. It recounts the reintegration of a woman into the social world around Fort Bragg after her Army tour in Afghanistan. Jackson is currently living in Durham, NC, and working on a crime novel set in his hometown of Philadelphia and a collection of stories, all military-related and North Carolina-based, spanning the period from the Revolutionary War to the present. Katey Schultz grew up in Portland, OR, and is most recently from Celo, NC. A graduate of the Pacific University MFA in Writing program and recipient of the Linda Flowers Literary Award from the North Carolina Humanities Council, she is currently writing a novel set in Afghanistan. She lives in a 1970 Airstream trailer bordering the Pisgah National Forest.

Katey Schultz chose a tough genre to break into: the close-up war narrative. Charles Frazier’s Cold Mountain crowned a long tradition that began with Stephen Crane. Dalton Trumbo exposed the horror of the battlefield and its aftermath in Johnny Got His Gun. In The Things They Carried and A Good Scent from a Strange Mountain, respectively, Tim O’Brien and Robert Olen Butler brought the real face of the Vietnam War into American awareness through short stories. The best works in this genre paint unique and intimate portraits: people navigating the violence and absurdity of battle, playing out their dark and final hours. Or non-combatants feeling the tentacles of war reaching beyond the battlefield. Flashes of War is Schultz’s first book, a collection of intimate studies, mostly flash pieces, with a handful of modest-length stories mixed in. They offer glimpses of the men and women affected by the Middle East wars of the last two decades, including Americans, Iraqis, and Afghanis. The flash pieces are the grist of this book – quick-hitting moments of experience, at times with little plot, just a character, a situation, and a moment. Taken together, they offer a panorama of the warfighters, locals, and family members back home, all trying to make it through.

Schultz reveals her underlying point of view early, in “While the Rest of America’s at the Mall.” The story begins with an account of a secret operation, a Navy SEAL swimming the underwater darkness in the shadow of a bridge over the Kunar River, dodging gunfire as “Bullets glitter through the water in slo-mo, little Hershey’s Kisses moving in silver arcs the way I remember Savannah tossing them to me on her fourth birthday” (1). Think Martin Sheen broaching the river surface like alligator eyes in Apocalypse Now. This very short story ends with the title phrase, “while the rest of America’s at the mall” (2), taking the reader back to the comfort and commercialism of home. Two points of view are set in motion here and weave through the book as subtext – underlying questions that remain just beneath the surface: What do Americans know or care about what’s happening over there? And what are the connections among the combatants, the local citizenry, and those waiting and hoping at home? The book is a call to awareness. And the lines in this piece make the first connection between battlefield and home. In “With the Burqa,” the intimacy shifts to an Iraqi woman looking out into the world through the mesh of her burqa. In her sleep, she dreams of bombs, bullets, and grenades growing rampant