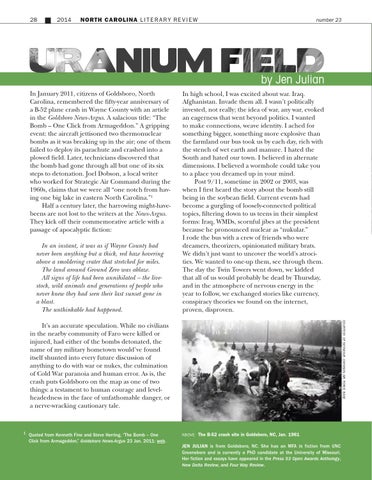 by Jen Julian In January 2011, citizens of Goldsboro, North Carolina, remembered the fifty-year anniversary of a B-52 plane crash in Wayne County with an article in the Goldsboro News-Argus. A salacious title: “The Bomb – One Click from Armageddon.” A gripping event: the aircraft jettisoned two thermonuclear bombs as it was breaking up in the air; one of them failed to deploy its parachute and crashed into a plowed field. Later, technicians discovered that the bomb had gone through all but one of its six steps to detonation. Joel Dobson, a local writer who worked for Strategic Air Command during the 1960s, claims that we were all “one notch from having one big lake in eastern North Carolina.”1 Half a century later, the harrowing might-havebeens are not lost to the writers at the News-Argus. They kick off their commemorative article with a passage of apocalyptic fiction: In an instant, it was as if Wayne County had never been anything but a thick, red haze hovering above a smoldering crater that stretched for miles. The land around Ground Zero was ablaze. All signs of life had been annihilated – the livestock, wild animals and generations of people who never knew they had seen their last sunset gone in a blast. The unthinkable had happened.

In high school, I was excited about war. Iraq. Afghanistan. Invade them all. I wasn’t politically invested, not really; the idea of war, any war, evoked an eagerness that went beyond politics. I wanted to make connections, weave identity. I ached for something bigger, something more explosive than the farmland our bus took us by each day, rich with the stench of wet earth and manure. I hated the South and hated our town. I believed in alternate dimensions. I believed a wormhole could take you to a place you dreamed up in your mind. Post 9/11, sometime in 2002 or 2003, was when I first heard the story about the bomb still being in the soybean field. Current events had become a gurgling of loosely-connected political topics, filtering down to us teens in their simplest forms: Iraq, WMDs, scornful jibes at the president because he pronounced nuclear as “nukular.” I rode the bus with a crew of friends who were dreamers, theorizers, opinionated military brats. We didn’t just want to uncover the world’s atrocities. We wanted to one-up them, see through them. The day the Twin Towers went down, we kidded that all of us would probably be dead by Thursday, and in the atmosphere of nervous energy in the year to follow, we exchanged stories like currency, conspiracy theories we found on the internet, proven, disproven. courtesy of Seymour Johnson Air Force Base

It’s an accurate speculation. While no civilians in the nearby community of Faro were killed or injured, had either of the bombs detonated, the name of my military hometown would’ve found itself shunted into every future discussion of anything to do with war or nukes, the culmination of Cold War paranoia and human error. As is, the crash puts Goldsboro on the map as one of two things: a testament to human courage and levelheadedness in the face of unfathomable danger, or a nerve-wracking cautionary tale.

Jen Julian is from Goldsboro, NC. She has an MFA in fiction from UNC Greensboro and is currently a PhD candidate at the University of Missouri. Her fiction and essays have appeared in the Press 53 Open Awards Anthology, New Delta Review, and Four Way Review.