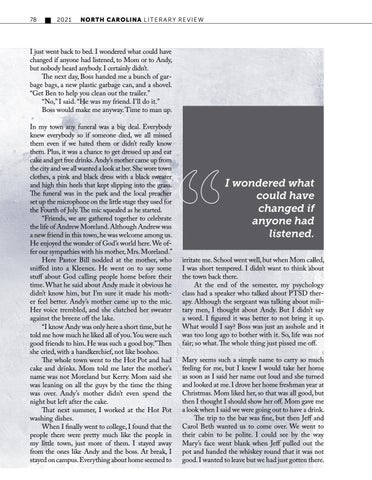 I just went back to bed. I wondered what could have changed if anyone had listened, to Mom or to Andy, but nobody heard anybody. I certainly didn’t. The next day, Boss handed me a bunch of garbage bags, a new plastic garbage can, and a shovel. “Get Ben to help you clean out the trailer.” “No,” I said. “He was my friend. I’ll do it.” Boss would make me anyway. Time to man up. In my town any funeral was a big deal. Everybody knew everybody so if someone died, we all missed them even if we hated them or didn’t really know them. Plus, it was a chance to get dressed up and eat cake and get free drinks. Andy’s mother came up from the city and we all wanted a look at her. She wore town clothes, a pink and black dress with a black sweater and high thin heels that kept slipping into the grass. The funeral was in the park and the local preacher set up the microphone on the little stage they used for the Fourth of July. The mic squealed as he started. “Friends, we are gathered together to celebrate the life of Andrew Moreland. Although Andrew was a new friend in this town, he was welcome among us. He enjoyed the wonder of God’s world here. We offer our sympathies with his mother, Mrs. Moreland.” Here Pastor Bill nodded at the mother, who sniffed into a Kleenex. He went on to say some stuff about God calling people home before their time. What he said about Andy made it obvious he didn’t know him, but I’m sure it made his mother feel better. Andy’s mother came up to the mic. Her voice trembled, and she clutched her sweater against the breeze off the lake. “I know Andy was only here a short time, but he told me how much he liked all of you. You were such good friends to him. He was such a good boy.” Then she cried, with a handkerchief, not like boohoo. The whole town went to the Hot Pot and had cake and drinks. Mom told me later the mother’s name was not Moreland but Kerry. Mom said she was leaning on all the guys by the time the thing was over. Andy’s mother didn’t even spend the night but left after the cake. That next summer, I worked at the Hot Pot washing dishes. When I finally went to college, I found that the people there were pretty much like the people in my little town, just more of them. I stayed away from the ones like Andy and the boss. At break, I stayed on campus. Everything about home seemed to

I wondered what could have changed if anyone had listened.

irritate me. School went well, but when Mom called, I was short tempered. I didn’t want to think about the town back there. At the end of the semester, my psychology class had a speaker who talked about PTSD therapy. Although the sergeant was talking about military men, I thought about Andy. But I didn’t say a word. I figured it was better to not bring it up. What would I say? Boss was just an asshole and it was too long ago to bother with it. So, life was not fair; so what. The whole thing just pissed me off. Mary seems such a simple name to carry so much feeling for me, but I knew I would take her home as soon as I said her name out loud and she turned and looked at me. I drove her home freshman year at Christmas. Mom liked her, so that was all good, but then I thought I should show her off. Mom gave me a look when I said we were going out to have a drink. The trip to the bar was fine, but then Jeff and Carol Beth wanted us to come over. We went to their cabin to be polite. I could see by the way Mary’s face went blank when Jeff pulled out the pot and handed the whiskey round that it was not good. I wanted to leave but we had just gotten there.