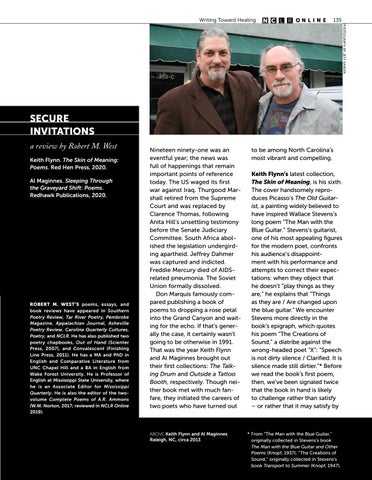 ROBERT M. WEST’S poems, essays, and book reviews have appeared in Southern Poetry Review, Tar River Poetry, Pembroke Magazine, Appalachian Journal, Asheville Poetry Review, Carolina Quarterly Cultures, Poetry, and NCLR. He has also published two poetry chapbooks, Out of Hand (Scienter Press, 2007), and Convalescent (Finishing Line Press, 2011). He has a MA and PhD in English and Comparative Literature from UNC Chapel Hill and a BA in English from Wake Forest University. He is Professor of English at Mississippi State University, where he is an Associate Editor for Mississippi Quarterly. He is also the editor of the twovolume Complete Poems of A.R. Ammons (W.W. Norton, 2017; reviewed in NCLR Online 2019).

Nineteen ninety-one was an eventful year; the news was full of happenings that remain important points of reference today. The US waged its first war against Iraq. Thurgood Marshall retired from the Supreme Court and was replaced by Clarence Thomas, following Anita Hill’s unsettling testimony before the Senate Judiciary Committee. South Africa abolished the legislation undergirding apartheid. Jeffrey Dahmer was captured and indicted. Freddie Mercury died of AIDSrelated pneumonia. The Soviet Union formally dissolved. Don Marquis famously compared publishing a book of poems to dropping a rose petal into the Grand Canyon and waiting for the echo. If that’s generally the case, it certainly wasn’t going to be otherwise in 1991. That was the year Keith Flynn and Al Maginnes brought out their first collections: The Talking Drum and Outside a Tattoo Booth, respectively. Though neither book met with much fanfare, they initiated the careers of two poets who have turned out

ABOVE Keith Flynn and Al Maginnes

to be among North Carolina’s most vibrant and compelling. Keith Flynn’s latest collection, The Skin of Meaning, is his sixth. The cover handsomely reproduces Picasso’s The Old Guitarist, a painting widely believed to have inspired Wallace Stevens’s long poem “The Man with the Blue Guitar.” Stevens’s guitarist, one of his most appealing figures for the modern poet, confronts his audience’s disappointment with his performance and attempts to correct their expectations: when they object that he doesn’t “play things as they are,” he explains that “Things as they are / Are changed upon the blue guitar.” We encounter Stevens more directly in the book’s epigraph, which quotes his poem “The Creations of Sound,” a diatribe against the wrong-headed poet “X”: “Speech is not dirty silence / Clarified. It is silence made still dirtier.”* Before we read the book’s first poem, then, we’ve been signaled twice that the book in hand is likely to challenge rather than satisfy – or rather that it may satisfy by