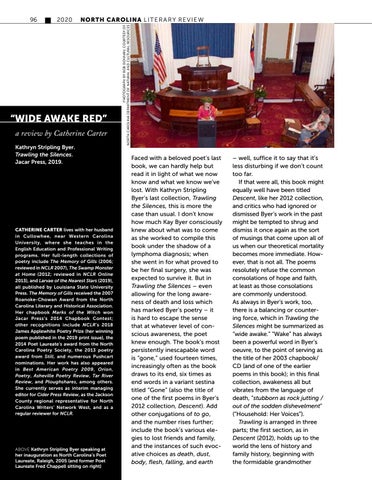 CATHERINE CARTER lives with her husband in Cullowhee, near Western Carolina University, where she teaches in the English Education and Professional Writing programs. Her full-length collections of poetry include The Memory of Gills (2006; reviewed in NCLR 2007), The Swamp Monster at Home (2012; reviewed in NCLR Online 2013), and Larvae of the Nearest Stars (2019), all published by Louisiana State University Press. The Memory of Gills received the 2007 Roanoke-Chowan Award from the North Carolina Literary and Historical Association. Her chapbook Marks of the Witch won Jacar Press’s 2014 Chapbook Contest; other recognitions include NCLR’s 2018 James Applewhite Poetry Prize (her winning poem published in the 2019 print issue), the 2014 Poet Laureate’s award from the North Carolina Poetry Society, the 2013 poetry award from Still, and numerous Pushcart nominations. Her work has also appeared in Best American Poetry 2009, Orion, Poetry, Asheville Poetry Review, Tar River Review, and Ploughshares, among others. She currently serves as interim managing editor for Cider Press Review, as the Jackson County regional representative for North Carolina Writers’ Network West, and as a regular reviewer for NCLR.

Faced with a beloved poet’s last book, we can hardly help but read it in light of what we now know and what we know we’ve lost. With Kathryn Stripling Byer’s last collection, Trawling the Silences, this is more the case than usual. I don’t know how much Kay Byer consciously knew about what was to come as she worked to compile this book under the shadow of a lymphoma diagnosis; when she went in for what proved to be her final surgery, she was expected to survive it. But in Trawling the Silences – even allowing for the long awareness of death and loss which has marked Byer’s poetry – it is hard to escape the sense that at whatever level of conscious awareness, the poet knew enough. The book’s most persistently inescapable word is “gone,” used fourteen times, increasingly often as the book draws to its end, six times as end words in a variant sestina titled “Gone” (also the title of one of the first poems in Byer’s 2012 collection, Descent). Add other conjugations of to go, and the number rises further; include the book’s various elegies to lost friends and family, and the instances of such evocative choices as death, dust, body, flesh, falling, and earth

– well, suffice it to say that it’s less disturbing if we don’t count too far. If that were all, this book might equally well have been titled Descent, like her 2012 collection, and critics who had ignored or dismissed Byer’s work in the past might be tempted to shrug and dismiss it once again as the sort of musings that come upon all of us when our theoretical mortality becomes more immediate. However, that is not all. The poems resolutely refuse the common consolations of hope and faith, at least as those consolations are commonly understood. As always in Byer’s work, too, there is a balancing or countering force, which in Trawling the Silences might be summarized as “wide awake.” “Wake” has always been a powerful word in Byer’s oeuvre, to the point of serving as the title of her 2003 chapbook/ CD (and of one of the earlier poems in this book); in this final collection, awakeness all but vibrates from the language of death, “stubborn as rock jutting / out of the sodden dishevelment” (“Household: Her Voices”). Trawling is arranged in three parts; the first section, as in Descent (2012), holds up to the world the lens of history and family history, beginning with the formidable grandmother