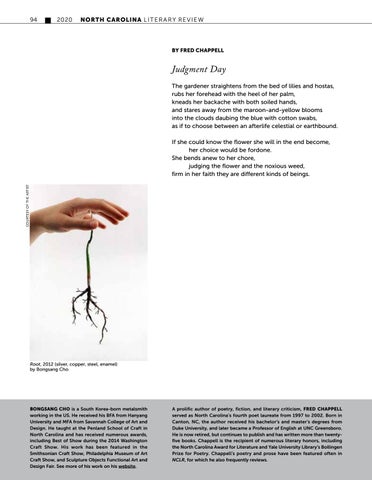 Judgment Day The gardener straightens from the bed of lilies and hostas, rubs her forehead with the heel of her palm, kneads her backache with both soiled hands, and stares away from the maroon-and-yellow blooms into the clouds daubing the blue with cotton swabs, as if to choose between an afterlife celestial or earthbound.

If she could know the flower she will in the end become, her choice would be fordone. She bends anew to her chore, judging the flower and the noxious weed, firm in her faith they are different kinds of beings.

BONGSANG CHO is a South Korea-born metalsmith working in the US. He received his BFA from Hanyang University and MFA from Savannah College of Art and Design. He taught at the Penland School of Craft in North Carolina and has received numerous awards, including Best of Show during the 2014 Washington Craft Show. His work has been featured in the Smithsonian Craft Show, Philadelphia Museum of Art Craft Show, and Sculpture Objects Functional Art and Design Fair. See more of his work on his website.

A prolific author of poetry, fiction, and literary criticism, FRED CHAPPELL served as North Carolina’s fourth poet laureate from 1997 to 2002. Born in Canton, NC, the author received his bachelor’s and master’s degrees from Duke University, and later became a Professor of English at UNC Greensboro. He is now retired, but continues to publish and has written more than twentyfive books. Chappell is the recipient of numerous literary honors, including the North Carolina Award for Literature and Yale University Library’s Bollingen Prize for Poetry. Chappell’s poetry and prose have been featured often in NCLR, for which he also frequently reviews.