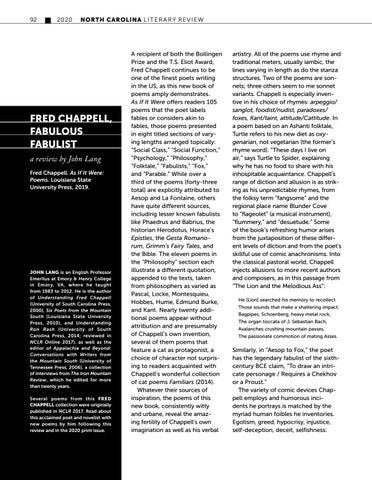 FRED CHAPPELL, FABULOUS FABULIST a review by John Lang Fred Chappell. As If It Were: Poems. Louisiana State University Press, 2019.

JOHN LANG is an English Professor Emeritus at Emory & Henry College in Emory, VA, where he taught from 1983 to 2012. He is the author of Understanding Fred Chappell (University of South Carolina Press, 2000), Six Poets from the Mountain South (Louisiana State University Press, 2010), and Understanding Ron Rash (University of South Carolina Press, 2014; reviewed in NCLR Online 2017), as well as the editor of Appalachia and Beyond: Conversations with Writers from the Mountain South (University of Tennessee Press, 2006), a collection of interviews from The Iron Mountain Review, which he edited for more than twenty years. Several poems from this FRED CHAPPELL collection were originally published in NCLR 2017. Read about this acclaimed poet and novelist with new poems by him following this review and in the 2020 print issue.

A recipient of both the Bollingen Prize and the T.S. Eliot Award, Fred Chappell continues to be one of the finest poets writing in the US, as this new book of poems amply demonstrates. As If It Were offers readers 105 poems that the poet labels fables or considers akin to fables, those poems presented in eight titled sections of varying lengths arranged topically: “Social Class,” “Social Function,” “Psychology,” “Philosophy,” “Folktale,” “Fabulists,” “Fox,” and “Parable.” While over a third of the poems (forty-three total) are explicitly attributed to Aesop and La Fontaine, others have quite different sources, including lesser known fabulists like Phaedrus and Babrius, the historian Herodotus, Horace’s Epistles, the Gesta Romanorum, Grimm’s Fairy Tales, and the Bible. The eleven poems in the “Philosophy” section each illustrate a different quotation, appended to the texts, taken from philosophers as varied as Pascal, Locke, Montesquieu, Hobbes, Hume, Edmund Burke, and Kant. Nearly twenty additional poems appear without attribution and are presumably of Chappell’s own invention, several of them poems that feature a cat as protagonist, a choice of character not surprising to readers acquainted with Chappell’s wonderful collection of cat poems Familiars (2014). Whatever their sources of inspiration, the poems of this new book, consistently witty and urbane, reveal the amazing fertility of Chappell’s own imagination as well as his verbal

artistry. All of the poems use rhyme and traditional meters, usually iambic, the lines varying in length as do the stanza structures. Two of the poems are sonnets; three others seem to me sonnet variants. Chappell is especially inventive in his choice of rhymes: arpeggio/ sanglot, foodist/nudist, paradoxes/ foxes, Kant/taint, attitude/Cattitude. In a poem based on an Ashanti folktale, Turtle refers to his new diet as oxygenarian, not vegetarian (the former’s rhyme word). “These days I live on air,” says Turtle to Spider, explaining why he has no food to share with his inhospitable acquaintance. Chappell’s range of diction and allusion is as striking as his unpredictable rhymes, from the folksy term “fangsome” and the regional place name Blunder Cove to “flageolet” (a musical instrument), “flummery,” and “desuetude.” Some of the book’s refreshing humor arises from the juxtaposition of these different levels of diction and from the poet’s skillful use of comic anachronisms. Into the classical pastoral world, Chappell injects allusions to more recent authors and composers, as in this passage from “The Lion and the Melodious Ass”: He [Lion] searched his memory to recollect Those sounds that make a shattering impact: Bagpipes, Schoenberg, heavy metal rock, The organ toccata of J. Sebastian Bach, Avalanches crushing mountain passes, The passionate commotion of mating Asses.

Similarly, in “Aesop to Fox,” the poet has the legendary fabulist of the sixthcentury BCE claim, “To draw an intricate personage / Requires a Chekhov or a Proust.” The variety of comic devices Chappell employs and humorous incidents he portrays is matched by the myriad human foibles he inventories. Egotism, greed, hypocrisy, injustice, self-deception, deceit, selfishness: