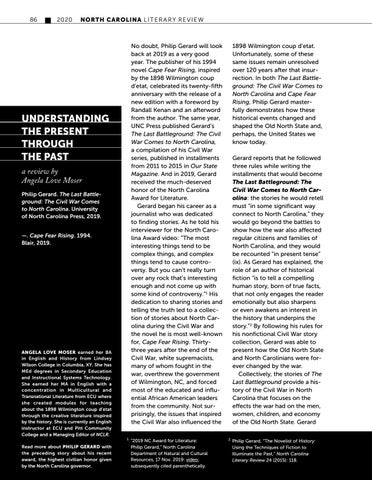 No doubt, Philip Gerard will look back at 2019 as a very good year. The publisher of his 1994 novel Cape Fear Rising, inspired by the 1898 Wilmington coup d’etat, celebrated its twenty-fifth anniversary with the release of a new edition with a foreword by Randall Kenan and an afterword from the author. The same year, UNC Press published Gerard’s The Last Battleground: The Civil War Comes to North Carolina, a compilation of his Civil War series, published in installments from 2011 to 2015 in Our State Magazine. And in 2019, Gerard received the much-deserved honor of the North Carolina Award for Literature. Gerard began his career as a journalist who was dedicated to finding stories. As he told his interviewer for the North Carolina Award video: “The most interesting things tend to be complex things, and complex things tend to cause controversy. But you can’t really turn over any rock that’s interesting enough and not come up with some kind of controversy.”1 His dedication to sharing stories and telling the truth led to a collection of stories about North Carolina during the Civil War and the novel he is most well-known for, Cape Fear Rising. Thirtythree years after the end of the Civil War, white supremacists, many of whom fought in the war, overthrew the government of Wilmington, NC, and forced most of the educated and influential African American leaders from the community. Not surprisingly, the issues that inspired the Civil War also influenced the

UNDERSTANDING THE PRESENT THROUGH THE PAST a review by Angela Love Moser Philip Gerard. The Last Battleground: The Civil War Comes to North Carolina. University of North Carolina Press, 2019. —. Cape Fear Rising. 1994. Blair, 2019.

ANGELA LOVE MOSER earned her BA in English and History from Lindsey Wilson College in Columbia, KY. She has MEd degrees in Secondary Education and Instructional Systems Technology. She earned her MA in English with a concentration in Multicultural and Transnational Literature from ECU where she created modules for teaching about the 1898 Wilmington coup d’etat through the creative literature inspired by the history. She is currently an English instructor at ECU and Pitt Community College and a Managing Editor of NCLR. 1

Read more about PHILIP GERARD with the preceding story about his recent award, the highest civilian honor given by the North Carolina governor.

1898 Wilmington coup d’etat. Unfortunately, some of these same issues remain unresolved over 120 years after that insurrection. In both The Last Battleground: The Civil War Comes to North Carolina and Cape Fear Rising, Philip Gerard masterfully demonstrates how these historical events changed and shaped the Old North State and, perhaps, the United States we know today. Gerard reports that he followed three rules while writing the installments that would become The Last Battleground: The Civil War Comes to North Carolina: the stories he would retell must “in some significant way connect to North Carolina,” they would go beyond the battles to show how the war also affected regular citizens and families of North Carolina, and they would be recounted “in present tense” (ix). As Gerard has explained, the role of an author of historical fiction “is to tell a compelling human story, born of true facts, that not only engages the reader emotionally but also sharpens or even awakens an interest in the history that underpins the story.”2 By following his rules for his nonfictional Civil War story collection, Gerard was able to present how the Old North State and North Carolinians were forever changed by the war. Collectively, the stories of The Last Battleground provide a history of the Civil War in North Carolina that focuses on the effects the war had on the men, women, children, and economy of the Old North State. Gerard 2

Philip Gerard, “The Novelist of History:

Using the Techniques of Fiction to Illuminate the Past,” North Carolina Literary Review 24 (2015): 118.