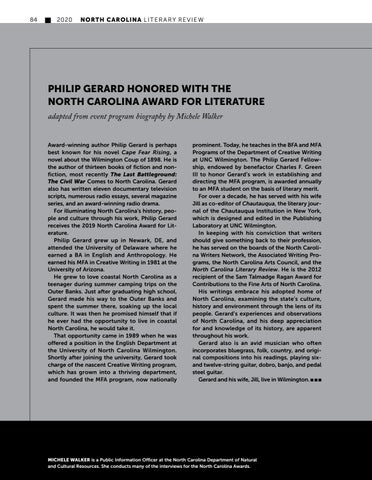 PHILIP GERARD HONORED WITH THE NORTH CAROLINA AWARD FOR LITERATURE adapted from event program biography by Michele Walker Award-winning author Philip Gerard is perhaps best known for his novel Cape Fear Rising, a novel about the Wilmington Coup of 1898. He is the author of thirteen books of fiction and nonfiction, most recently The Last Battleground: The Civil War Comes to North Carolina. Gerard also has written eleven documentary television scripts, numerous radio essays, several magazine series, and an award-winning radio drama. For illuminating North Carolina’s history, people and culture through his work, Philip Gerard receives the 2019 North Carolina Award for Literature. Philip Gerard grew up in Newark, DE, and attended the University of Delaware where he earned a BA in English and Anthropology. He earned his MFA in Creative Writing in 1981 at the University of Arizona. He grew to love coastal North Carolina as a teenager during summer camping trips on the Outer Banks. Just after graduating high school, Gerard made his way to the Outer Banks and spent the summer there, soaking up the local culture. It was then he promised himself that if he ever had the opportunity to live in coastal North Carolina, he would take it. That opportunity came in 1989 when he was offered a position in the English Department at the University of North Carolina Wilmington. Shortly after joining the university, Gerard took charge of the nascent Creative Writing program, which has grown into a thriving department, and founded the MFA program, now nationally

prominent. Today, he teaches in the BFA and MFA Programs of the Department of Creative Writing at UNC Wilmington. The Philip Gerard Fellowship, endowed by benefactor Charles F. Green III to honor Gerard’s work in establishing and directing the MFA program, is awarded annually to an MFA student on the basis of literary merit. For over a decade, he has served with his wife Jill as co-editor of Chautauqua, the literary journal of the Chautauqua Institution in New York, which is designed and edited in the Publishing Laboratory at UNC Wilmington. In keeping with his conviction that writers should give something back to their profession, he has served on the boards of the North Carolina Writers Network, the Associated Writing Programs, the North Carolina Arts Council, and the North Carolina Literary Review. He is the 2012 recipient of the Sam Talmadge Ragan Award for Contributions to the Fine Arts of North Carolina. His writings embrace his adopted home of North Carolina, examining the state’s culture, history and environment through the lens of its people. Gerard’s experiences and observations of North Carolina, and his deep appreciation for and knowledge of its history, are apparent throughout his work. Gerard also is an avid musician who often incorporates bluegrass, folk, country, and original compositions into his readings, playing sixand twelve-string guitar, dobro, banjo, and pedal steel guitar. Gerard and his wife, Jill, live in Wilmington. n n n