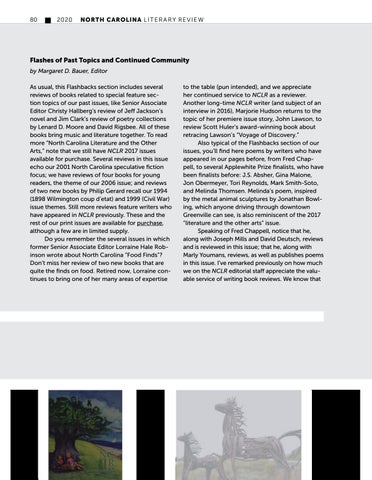 Flashes of Past Topics and Continued Community by Margaret D. Bauer, Editor As usual, this Flashbacks section includes several reviews of books related to special feature section topics of our past issues, like Senior Associate Editor Christy Hallberg’s review of Jeff Jackson’s novel and Jim Clark’s review of poetry collections by Lenard D. Moore and David Rigsbee. All of these books bring music and literature together. To read more “North Carolina Literature and the Other Arts,” note that we still have NCLR 2017 issues available for purchase. Several reviews in this issue echo our 2001 North Carolina speculative fiction focus; we have reviews of four books for young readers, the theme of our 2006 issue; and reviews of two new books by Philip Gerard recall our 1994 (1898 Wilmington coup d’etat) and 1999 (Civil War) issue themes. Still more reviews feature writers who have appeared in NCLR previously. These and the rest of our print issues are available for purchase, although a few are in limited supply. Do you remember the several issues in which former Senior Associate Editor Lorraine Hale Robinson wrote about North Carolina “Food Finds”? Don’t miss her review of two new books that are quite the finds on food. Retired now, Lorraine continues to bring one of her many areas of expertise

to the table (pun intended), and we appreciate her continued service to NCLR as a reviewer. Another long-time NCLR writer (and subject of an interview in 2016), Marjorie Hudson returns to the topic of her premiere issue story, John Lawson, to review Scott Huler’s award-winning book about retracing Lawson’s “Voyage of Discovery.” Also typical of the Flashbacks section of our issues, you’ll find here poems by writers who have appeared in our pages before, from Fred Chappell, to several Applewhite Prize finalists, who have been finalists before: J.S. Absher, Gina Malone, Jon Obermeyer, Tori Reynolds, Mark Smith-Soto, and Melinda Thomsen. Melinda’s poem, inspired by the metal animal sculptures by Jonathan Bowling, which anyone driving through downtown Greenville can see, is also reminiscent of the 2017 “literature and the other arts” issue. Speaking of Fred Chappell, notice that he, along with Joseph Mills and David Deutsch, reviews and is reviewed in this issue; that he, along with Marly Youmans, reviews, as well as publishes poems in this issue. I’ve remarked previously on how much we on the NCLR editorial staff appreciate the valuable service of writing book reviews. We know that