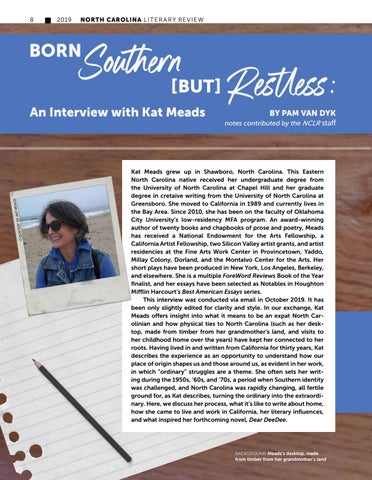 An Interview with Kat Meads

BY PAM VAN DYK notes contributed by the NCLR staff

Kat Meads grew up in Shawboro, North Carolina. This Eastern North Carolina native received her undergraduate degree from the University of North Carolina at Chapel Hill and her graduate degree in cretaive writing from the University of North Carolina at Greensboro. She moved to California in 1989 and currently lives in the Bay Area. Since 2010, she has been on the faculty of Oklahoma City University’s low-residency MFA program. An award-winning author of twenty books and chapbooks of prose and poetry, Meads has received a National Endowment for the Arts Fellowship, a California Artist Fellowship, two Silicon Valley artist grants, and artist residencies at the Fine Arts Work Center in Provincetown, Yaddo, Millay Colony, Dorland, and the Montalvo Center for the Arts. Her short plays have been produced in New York, Los Angeles, Berkeley, and elsewhere. She is a multiple ForeWord Reviews Book of the Year finalist, and her essays have been selected as Notables in Houghton Mifflin Harcourt’s Best American Essays series. This interview was conducted via email in October 2019. It has been only slightly edited for clarity and style. In our exchange, Kat Meads offers insight into what it means to be an expat North Carolinian and how physical ties to North Carolina (such as her desktop, made from timber from her grandmother’s land, and visits to her childhood home over the years) have kept her connected to her roots. Having lived in and written from California for thirty years, Kat describes the experience as an opportunity to understand how our place of origin shapes us and those around us, as evident in her work, in which “ordinary” struggles are a theme. She often sets her writing during the 1950s, ‘60s, and ‘70s, a period when Southern identity was challenged, and North Carolina was rapidly changing, all fertile ground for, as Kat describes, turning the ordinary into the extraordinary. Here, we discuss her process, what it’s like to write about home, how she came to live and work in California, her literary influences, and what inspired her forthcoming novel, Dear DeeDee.

from timber from her grandmother’s land