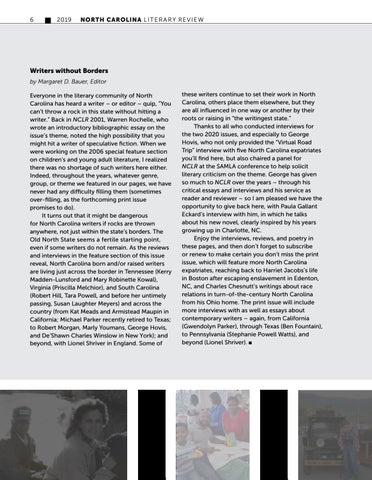 Writers without Borders by Margaret D. Bauer, Editor Everyone in the literary community of North Carolina has heard a writer – or editor – quip, “You can’t throw a rock in this state without hitting a writer.” Back in NCLR 2001, Warren Rochelle, who wrote an introductory bibliographic essay on the issue’s theme, noted the high possibility that you might hit a writer of speculative fiction. When we were working on the 2006 special feature section on children’s and young adult literature, I realized there was no shortage of such writers here either. Indeed, throughout the years, whatever genre, group, or theme we featured in our pages, we have never had any difficulty filling them (sometimes over-filling, as the forthcoming print issue promises to do). It turns out that it might be dangerous for North Carolina writers if rocks are thrown anywhere, not just within the state’s borders. The Old North State seems a fertile starting point, even if some writers do not remain. As the reviews and interviews in the feature section of this issue reveal, North Carolina born and/or raised writers are living just across the border in Tennessee (Kerry Madden-Lunsford and Mary Robinette Kowal), Virginia (Priscilla Melchior), and South Carolina (Robert Hill, Tara Powell, and before her untimely passing, Susan Laughter Meyers) and across the country (from Kat Meads and Armistead Maupin in California; Michael Parker recently retired to Texas; to Robert Morgan, Marly Youmans, George Hovis, and De’Shawn Charles Winslow in New York); and beyond, with Lionel Shriver in England. Some of

these writers continue to set their work in North Carolina, others place them elsewhere, but they are all influenced in one way or another by their roots or raising in “the writingest state.” Thanks to all who conducted interviews for the two 2020 issues, and especially to George Hovis, who not only provided the “Virtual Road Trip” interview with five North Carolina expatriates you’ll find here, but also chaired a panel for NCLR at the SAMLA conference to help solicit literary criticism on the theme. George has given so much to NCLR over the years – through his critical essays and interviews and his service as reader and reviewer – so I am pleased we have the opportunity to give back here, with Paula Gallant Eckard’s interview with him, in which he talks about his new novel, clearly inspired by his years growing up in Charlotte, NC. Enjoy the interviews, reviews, and poetry in these pages, and then don’t forget to subscribe or renew to make certain you don’t miss the print issue, which will feature more North Carolina expatriates, reaching back to Harriet Jacobs’s life in Boston after escaping enslavement in Edenton, NC, and Charles Chesnutt’s writings about race relations in turn-of-the-century North Carolina from his Ohio home. The print issue will include more interviews with as well as essays about contemporary writers – again, from California (Gwendolyn Parker), through Texas (Ben Fountain), to Pennsylvania (Stephanie Powell Watts), and beyond (Lionel Shriver). n