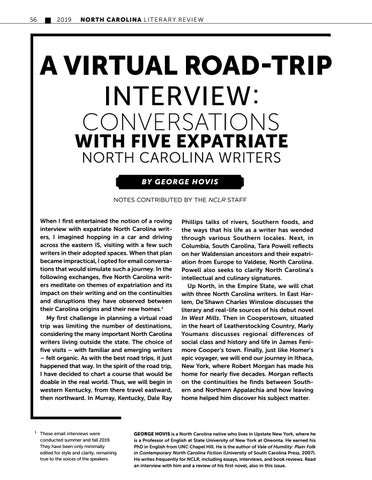 WITH FIVE EXPATRIATE NORTH CAROLINA WRITERS BY GEORGE HOVIS NOTES CONTRIBUTED BY THE NCLR STAFF When I first entertained the notion of a roving interview with expatriate North Carolina writers, I imagined hopping in a car and driving across the eastern IS, visiting with a few such writers in their adopted spaces. When that plan became impractical, I opted for email conversations that would simulate such a journey. In the following exchanges, five North Carolina writers meditate on themes of expatriation and its impact on their writing and on the continuities and disruptions they have observed between their Carolina origins and their new homes.1 My first challenge in planning a virtual road trip was limiting the number of destinations, considering the many important North Carolina writers living outside the state. The choice of five visits – with familiar and emerging writers – felt organic. As with the best road trips, it just happened that way. In the spirit of the road trip, I have decided to chart a course that would be doable in the real world. Thus, we will begin in western Kentucky, from there travel eastward, then northward. In Murray, Kentucky, Dale Ray

These email interviews were conducted summer and fall 2019. They have been only minimally edited for style and clarity, remaining true to the voices of the speakers.

Phillips talks of rivers, Southern foods, and the ways that his life as a writer has wended through various Southern locales. Next, in Columbia, South Carolina, Tara Powell reflects on her Waldensian ancestors and their expatriation from Europe to Valdese, North Carolina. Powell also seeks to clarify North Carolina’s intellectual and culinary signatures. Up North, in the Empire State, we will chat with three North Carolina writers. In East Harlem, De’Shawn Charles Winslow discusses the literary and real-life sources of his debut novel In West Mills. Then in Cooperstown, situated in the heart of Leatherstocking Country, Marly Youmans discusses regional differences of social class and history and life in James Fenimore Cooper’s town. Finally, just like Homer’s epic voyager, we will end our journey in Ithaca, New York, where Robert Morgan has made his home for nearly five decades. Morgan reflects on the continuities he finds between Southern and Northern Appalachia and how leaving home helped him discover his subject matter.

GEORGE HOVIS is a North Carolina native who lives in Upstate New York, where he is a Professor of English at State University of New York at Oneonta. He earned his PhD in English from UNC Chapel Hill. He is the author of Vale of Humility: Plain Folk in Contemporary North Carolina Fiction (University of South Carolina Press, 2007). He writes frequently for NCLR, including essays, interviews, and book reviews. Read an interview with him and a review of his first novel, also in this issue.