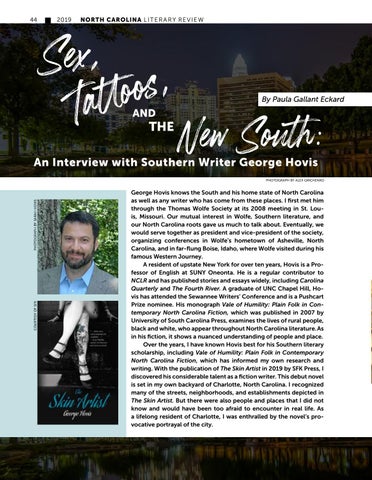 George Hovis knows the South and his home state of North Carolina as well as any writer who has come from these places. I first met him through the Thomas Wolfe Society at its 2008 meeting in St. Louis, Missouri. Our mutual interest in Wolfe, Southern literature, and our North Carolina roots gave us much to talk about. Eventually, we would serve together as president and vice-president of the society, organizing conferences in Wolfe’s hometown of Asheville, North Carolina, and in far-flung Boise, Idaho, where Wolfe visited during his famous Western Journey. A resident of upstate New York for over ten years, Hovis is a Professor of English at SUNY Oneonta. He is a regular contributor to NCLR and has published stories and essays widely, including Carolina Quarterly and The Fourth River. A graduate of UNC Chapel Hill, Hovis has attended the Sewannee Writers’ Conference and is a Pushcart Prize nominee. His monograph Vale of Humility: Plain Folk in Contemporary North Carolina Fiction, which was published in 2007 by University of South Carolina Press, examines the lives of rural people, black and white, who appear throughout North Carolina literature. As in his fiction, it shows a nuanced understanding of people and place. Over the years, I have known Hovis best for his Southern literary scholarship, including Vale of Humility: Plain Folk in Contemporary North Carolina Fiction, which has informed my own research and writing. With the publication of The Skin Artist in 2019 by SFK Press, I discovered his considerable talent as a fiction writer. This debut novel is set in my own backyard of Charlotte, North Carolina. I recognized many of the streets, neighborhoods, and establishments depicted in The Skin Artist. But there were also people and places that I did not know and would have been too afraid to encounter in real life. As a lifelong resident of Charlotte, I was enthralled by the novel’s provocative portrayal of the city.