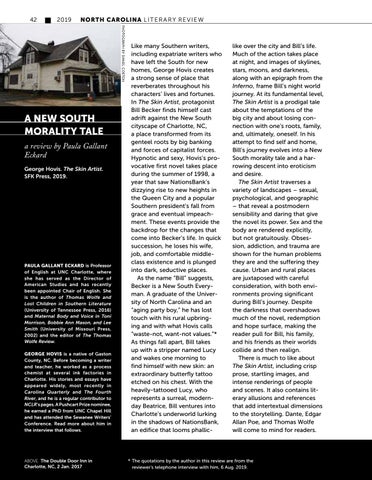 PAULA GALLANT ECKARD is Professor of English at UNC Charlotte, where she has served as the Director of American Studies and has recently been appointed Chair of English. She is the author of Thomas Wolfe and Lost Children in Southern Literature (University of Tennessee Press, 2016) and Maternal Body and Voice in Toni Morrison, Bobbie Ann Mason, and Lee Smith (University of Missouri Press, 2002) and the editor of The Thomas Wolfe Review. GEORGE HOVIS is a native of Gaston County, NC. Before becoming a writer and teacher, he worked as a process chemist at several ink factories in Charlotte. His stories and essays have appeared widely, most recently in Carolina Quarterly and The Fourth River, and he is a regular contributor to NCLR’s pages. A Pushcart Prize nominee, he earned a PhD from UNC Chapel Hill and has attended the Sewanee Writers’ Conference. Read more about him in the interview that follows.

Like many Southern writers, including expatriate writers who have left the South for new homes, George Hovis creates a strong sense of place that reverberates throughout his characters’ lives and fortunes. In The Skin Artist, protagonist Bill Becker finds himself cast adrift against the New South cityscape of Charlotte, NC, a place transformed from its genteel roots by big banking and forces of capitalist forces. Hypnotic and sexy, Hovis’s provocative first novel takes place during the summer of 1998, a year that saw NationsBank’s dizzying rise to new heights in the Queen City and a popular Southern president’s fall from grace and eventual impeachment. These events provide the backdrop for the changes that come into Becker’s life. In quick succession, he loses his wife, job, and comfortable middleclass existence and is plunged into dark, seductive places. As the name “Bill” suggests, Becker is a New South Everyman. A graduate of the University of North Carolina and an “aging party boy,” he has lost touch with his rural upbringing and with what Hovis calls “waste-not, want-not values.”* As things fall apart, Bill takes up with a stripper named Lucy and wakes one morning to find himself with new skin: an extraordinary butterfly tattoo etched on his chest. With the heavily-tattooed Lucy, who represents a surreal, modernday Beatrice, Bill ventures into Charlotte’s underworld lurking in the shadows of NationsBank, an edifice that looms phallic-

like over the city and Bill’s life. Much of the action takes place at night, and images of skylines, stars, moons, and darkness, along with an epigraph from the Inferno, frame Bill’s night world journey. At its fundamental level, The Skin Artist is a prodigal tale about the temptations of the big city and about losing connection with one’s roots, family, and, ultimately, oneself. In his attempt to find self and home, Bill’s journey evolves into a New South morality tale and a harrowing descent into eroticism and desire. The Skin Artist traverses a variety of landscapes – sexual, psychological, and geographic – that reveal a postmodern sensibility and daring that give the novel its power. Sex and the body are rendered explicitly, but not gratuitously. Obsession, addiction, and trauma are shown for the human problems they are and the suffering they cause. Urban and rural places are juxtaposed with careful consideration, with both environments proving significant during Bill’s journey. Despite the darkness that overshadows much of the novel, redemption and hope surface, making the reader pull for Bill, his family, and his friends as their worlds collide and then realign. There is much to like about The Skin Artist, including crisp prose, startling images, and intense renderings of people and scenes. It also contains literary allusions and references that add intertextual dimensions to the storytelling. Dante, Edgar Allan Poe, and Thomas Wolfe will come to mind for readers.

* The quotations by the author in this review are from the reviewer’s telephone interview with him, 6 Aug. 2019.