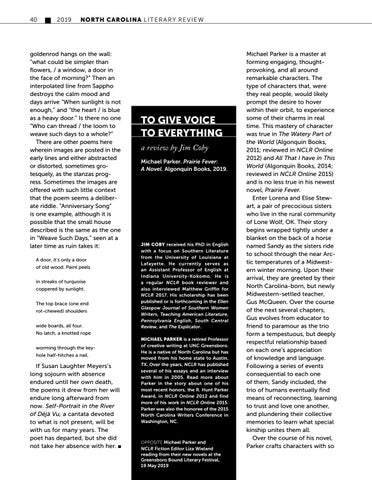 goldenrod hangs on the wall: “what could be simpler than flowers, / a window, a door in the face of morning?” Then an interpolated line from Sappho destroys the calm mood and days arrive “When sunlight is not enough,” and “the heart / is blue as a heavy door.” Is there no one “Who can thread / the loom to weave such days to a whole?” There are other poems here wherein images are posted in the early lines and either abstracted or distorted, sometimes grotesquely, as the stanzas progress. Sometimes the images are offered with such little context that the poem seems a deliberate riddle. “Anniversary Song” is one example, although it is possible that the small house described is the same as the one in “Weave Such Days,” seen at a later time as ruin takes it: A door, it’s only a door of old wood. Paint peels in streaks of turquoise coppered by sunlight. The top brace (one end rot-chewed) shoulders wide boards, all four.

TO GIVE VOICE TO EVERYTHING a review by Jim Coby Michael Parker. Prairie Fever: A Novel. Algonquin Books, 2019.

JIM COBY received his PhD in English with a focus on Southern Literature from the University of Louisiana at Lafayette. He currently serves as an Assistant Professor of English at Indiana University-Kokomo. He is a regular NCLR book reviewer and also interviewed Matthew Griffin for NCLR 2017. His scholarship has been published or is forthcoming in the Ellen Glasgow Journal of Southern Women Writers, Teaching American Literature, Pennsylvania English, South Central Review, and The Explicator.

No latch, a knotted rope worming through the key­hole half-hitches a nail.

If Susan Laughter Meyers’s long sojourn with absence endured until her own death, the poems it drew from her will endure long afterward from now. Self-Portrait in the River of Déjà Vu, a cantata devoted to what is not present, will be with us for many years. The poet has departed, but she did not take her absence with her. n

MICHAEL PARKER is a retired Professor of creative writing at UNC Greensboro. He is a native of North Carolina but has moved from his home state to Austin, TX. Over the years, NCLR has published several of his essays and an interview with him in 2005. Read more about Parker in the story about one of his most recent honors, the R. Hunt Parker Award, in NCLR Online 2012 and find more of his work in NCLR Online 2015. Parker was also the honoree of the 2015 North Carolina Writers Conference in Washington, NC.

at the Bookmarks 2019.at the reading from theirFestival new novels Greensboro Bound Literary Festival, 19 May 2019

Michael Parker is a master at forming engaging, thoughtprovoking, and all around remarkable characters. The type of characters that, were they real people, would likely prompt the desire to hover within their orbit, to experience some of their charms in real time. This mastery of character was true in The Watery Part of the World (Algonquin Books, 2011; reviewed in NCLR Online 2012) and All That I have in This World (Algonquin Books, 2014; reviewed in NCLR Online 2015) and is no less true in his newest novel, Prairie Fever. Enter Lorena and Elise Stewart, a pair of precocious sisters who live in the rural community of Lone Wolf, OK. Their story begins wrapped tightly under a blanket on the back of a horse named Sandy as the sisters ride to school through the near Arctic temperatures of a Midwestern winter morning. Upon their arrival, they are greeted by their North Carolina-born, but newly Midwestern-settled teacher, Gus McQueen. Over the course of the next several chapters, Gus evolves from educator to friend to paramour as the trio form a tempestuous, but deeply respectful relationship based on each one’s appreciation of knowledge and language. Following a series of events consequential to each one of them, Sandy included, the trio of humans eventually find means of reconnecting, learning to trust and love one another, and plundering their collective memories to learn what special kinship unites them all. Over the course of his novel, Parker crafts characters with so