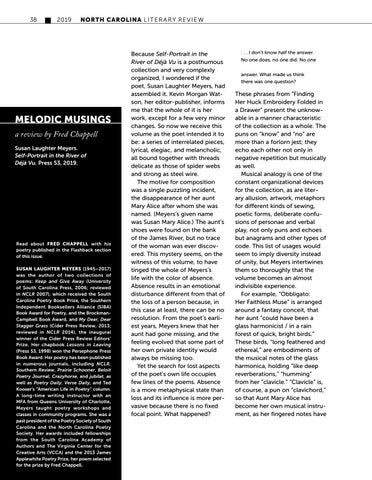 Read about FRED CHAPPELL with his poetry published in the Flashback section of this issue. SUSAN LAUGHTER MEYERS (1945–2017) was the author of two collections of poems: Keep and Give Away (University of South Carolina Press, 2006; reviewed in NCLR 2007), which received the South Carolina Poetry Book Prize, the Southern Independent Booksellers Alliance (SIBA) Book Award for Poetry, and the BrockmanCampbell Book Award, and My Dear, Dear Stagger Grass (Cider Press Review, 2013; reviewed in NCLR 2014), the inaugural winner of the Cider Press Review Editors’ Prize. Her chapbook Lessons in Leaving (Press 53, 1998) won the Persephone Press Book Award. Her poetry has been published in numerous journals, including NCLR, Southern Review, Prairie Schooner, Beloit Poetry Journal, Crazyhorse, and jubilat, as well as Poetry Daily, Verse Daily, and Ted Kooser’s “American Life in Poetry” column. A long-time writing instructor with an MFA from Queens University of Charlotte, Meyers taught poetry workshops and classes in community programs. She was a past president of the Poetry Society of South Carolina and the North Carolina Poetry Society. Her awards included fellowships from the South Carolina Academy of Authors and The Virginia Center for the Creative Arts (VCCA) and the 2013 James Applewhite Poetry Prize, her poem selected for the prize by Fred Chappell.

Because Self-Portrait in the River of Déjà Vu is a posthumous collection and very complexly organized, I wondered if the poet, Susan Laughter Meyers, had assembled it. Kevin Morgan Watson, her editor-publisher, informs me that the whole of it is her work, except for a few very minor changes. So now we receive this volume as the poet intended it to be: a series of interrelated pieces, lyrical, elegiac, and melancholic, all bound together with threads delicate as those of spider webs and strong as steel wire. The motive for composition was a single puzzling incident, the disappearance of her aunt Mary Alice after whom she was named. (Meyers’s given name was Susan Mary Alice.) The aunt’s shoes were found on the bank of the James River, but no trace of the woman was ever discovered. This mystery seems, on the witness of this volume, to have tinged the whole of Meyers’s life with the color of absence. Absence results in an emotional disturbance different from that of the loss of a person because, in this case at least, there can be no resolution. From the poet’s earliest years, Meyers knew that her aunt had gone missing, and the feeling evolved that some part of her own private identity would always be missing too. Yet the search for lost aspects of the poet’s own life occupies few lines of the poems. Absence is a more metaphysical state than loss and its influence is more pervasive because there is no fixed focal point. What happened?

. . . I don’t know half the answer. No one does, no one did. No one answer. What made us think there was one question?

These phrases from “Finding Her Huck Embroidery Folded in a Drawer” present the unknowable in a manner characteristic of the collection as a whole. The puns on “know” and “no” are more than a forlorn jest; they echo each other not only in negative repetition but musically as well. Musical analogy is one of the constant organizational devices for the collection, as are literary allusion, artwork, metaphors for different kinds of sewing, poetic forms, deliberate confusions of personae and verbal play, not only puns and echoes but anagrams and other types of code. This list of usages would seem to imply diversity instead of unity, but Meyers intertwines them so thoroughly that the volume becomes an almost indivisible experience. For example, “Obbligato: Her Faithless Muse” is arranged around a fantasy conceit, that her aunt “could have been a glass harmonicist / in a rain forest of quick, bright birds.” These birds, “long feathered and ethereal,” are embodiments of the musical notes of the glass harmonica, holding “like deep reverberations,” “humming” from her “clavicle.” “Clavicle” is, of course, a pun on “clavichord,” so that Aunt Mary Alice has become her own musical instrument, as her fingered notes have