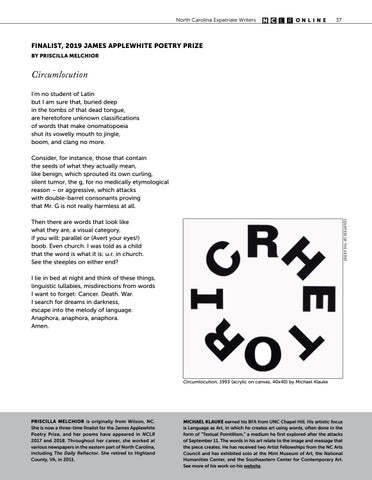 Circumlocution I’m no student of Latin but I am sure that, buried deep in the tombs of that dead tongue, are heretofore unknown classifications of words that make onomatopoeia shut its vowelly mouth to jingle, boom, and clang no more. Consider, for instance, those that contain the seeds of what they actually mean, like benign, which sprouted its own curling, silent tumor, the g, for no medically etymological reason – or aggressive, which attacks with double-barrel consonants proving that Mr. G is not really harmless at all. COURTESY OF THE ARTIST

Then there are words that look like what they are, a visual category, if you will: parallel or (Avert your eyes!) boob. Even church. I was told as a child that the word is what it is: u.r. in church. See the steeples on either end? I lie in bed at night and think of these things, linguistic lullabies, misdirections from words I want to forget: Cancer. Death. War. I search for dreams in darkness, escape into the melody of language. Anaphora, anaphora, anaphora. Amen.

PRISCILLA MELCHIOR is originally from Wilson, NC. She is now a three-time finalist for the James Applewhite Poetry Prize, and her poems have appeared in NCLR 2017 and 2018. Throughout her career, she worked at various newspapers in the eastern part of North Carolina, including The Daily Reflector. She retired to Highland County, VA, in 2011.

MICHAEL KLAUKE earned his BFA from UNC Chapel Hill. His artistic focus is Language as Art, in which he creates art using words, often done in the form of “Textual Pointillism,” a medium he first explored after the attacks of September 11. The words in his art relate to the image and message that the piece creates. He has received two Artist Fellowships from the NC Arts Council and has exhibited solo at the Mint Museum of Art, the National Humanities Center, and the Southeastern Center for Contemporary Art. See more of his work on his website.