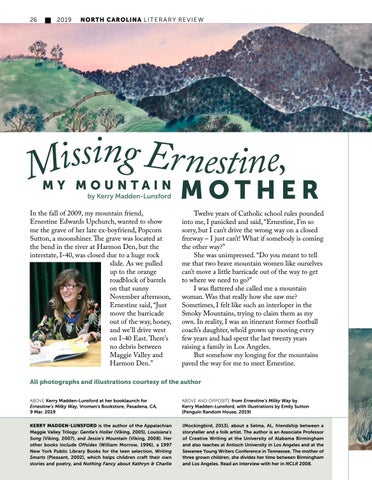 woolen scarf. She handed her two mason jars of milk with the lids screwed on tight. “See Venus shining up there?” she said. “That’s

In the fall of 2009, my mountain friend, Ernestine Edwards Upchurch, wanted to show me the grave of her late ex-boyfriend, Popcorn Sutton, a moonshiner. The grave was located at the bend in the river at Harmon Den, but the interstate, I-40, was closed due to a huge rock slide. As we pulled up to the orange roadblock of barrels on that sunny November afternoon, Ernestine said, “Just move the barricade out of the way, honey, and we’ll drive west on I-40 East. There’s no debris between Maggie Valley and Harmon Den.”

Twelve years of Catholic school rules pounded into me, I panicked and said, “Ernestine, I’m so sorry, but I can’t drive the wrong way on a closed freeway – I just can’t! What if somebody is coming the other way?” She was unimpressed. “Do you meant to tell me that two brave mountain women like ourselves can’t move a little barricade out of the way to get to where we need to go?” I was flattered she called me a mountain woman. Was that really how she saw me? Sometimes, I felt like such an interloper in the Smoky Mountains, trying to claim them as my own. In reality, I was an itinerant former football coach’s daughter, who’d grown up moving every few years and had spent the last twenty years raising a family in Los Angeles. But somehow my longing for the mountains paved the way for me to meet Ernestine.

All photographs and illustrations courtesy of the author ABOVE Kerry Madden-Lunsford at her booklaunch for Ernestine’s Milky Way, Vroman’s Bookstore, Pasadena, CA, 9 Mar. 2019

ABOVE AND OPPOSITE from Ernestine’s Milky Way by Kerry Madden-Lunsford, with illustrations by Emily Sutton (Penguin Random House, 2019)

KERRY MADDEN-LUNSFORD is the author of the Appalachian Maggie Valley Trilogy: Gentle’s Holler (Viking, 2005), Louisiana’s Song (Viking, 2007), and Jessie’s Mountain (Viking, 2008). Her other books include Offsides (William Morrow, 1996), a 1997 New York Public Library Books for the teen selection, Writing Smarts (Pleasant, 2002), which helps children craft their own stories and poetry, and Nothing Fancy about Kathryn & Charlie

(Mockingbird, 2013), about a Selma, AL, friendship between a storyteller and a folk artist. The author is an Associate Professor of Creative Writing at the University of Alabama Birmingham and also teaches at Antioch University in Los Angeles and at the Sewanee Young Writers Conference in Tennessee. The mother of three grown children, she divides her time between Birmingham and Los Angeles. Read an interview with her in NCLR 2008.

And so E a lavender