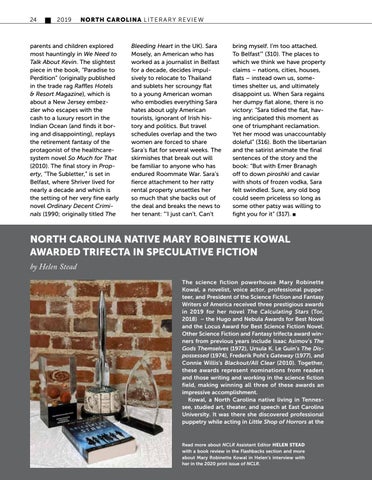 parents and children explored most hauntingly in We Need to Talk About Kevin. The slightest piece in the book, “Paradise to Perdition” (originally published in the trade rag Raffles Hotels & Resort Magazine), which is about a New Jersey embezzler who escapes with the cash to a luxury resort in the Indian Ocean (and finds it boring and disappointing), replays the retirement fantasy of the protagonist of the healthcaresystem novel So Much for That (2010). The final story in Property, “The Subletter,” is set in Belfast, where Shriver lived for nearly a decade and which is the setting of her very fine early novel Ordinary Decent Criminals (1990; originally titled The

Bleeding Heart in the UK). Sara Mosely, an American who has worked as a journalist in Belfast for a decade, decides impulsively to relocate to Thailand and sublets her scroungy flat to a young American woman who embodies everything Sara hates about ugly American tourists, ignorant of Irish history and politics. But travel schedules overlap and the two women are forced to share Sara’s flat for several weeks. The skirmishes that break out will be familiar to anyone who has endured Roommate War. Sara’s fierce attachment to her ratty rental property unsettles her so much that she backs out of the deal and breaks the news to her tenant: “‘I just can’t. Can’t

bring myself. I’m too attached. To Belfast’” (310). The places to which we think we have property claims – nations, cities, houses, flats – instead own us, sometimes shelter us, and ultimately disappoint us. When Sara regains her dumpy flat alone, there is no victory: “Sara tidied the flat, having anticipated this moment as one of triumphant reclamation. Yet her mood was unaccountably doleful” (316). Both the libertarian and the satirist animate the final sentences of the story and the book: “But with Emer Branagh off to down piroshki and caviar with shots of frozen vodka, Sara felt swindled. Sure, any old bog could seem priceless so long as some other patsy was willing to fight you for it” (317). n

NORTH CAROLINA NATIVE MARY ROBINETTE KOWAL AWARDED TRIFECTA IN SPECULATIVE FICTION by Helen Stead The science fiction powerhouse Mary Robinette Kowal, a novelist, voice actor, professional puppeteer, and President of the Science Fiction and Fantasy Writers of America received three prestigious awards in 2019 for her novel The Calculating Stars (Tor, 2018) – the Hugo and Nebula Awards for Best Novel and the Locus Award for Best Science Fiction Novel. Other Science Fiction and Fantasy trifecta award winners from previous years include Isaac Asimov’s The Gods Themselves (1972), Ursula K. Le Guin’s The Dispossessed (1974), Frederik Pohl’s Gateway (1977), and Connie Willis’s Blackout/All Clear (2010). Together, these awards represent nominations from readers and those writing and working in the science fiction field, making winning all three of these awards an impressive accomplishment. Kowal, a North Carolina native living in Tennessee, studied art, theater, and speech at East Carolina University. It was there she discovered professional puppetry while acting in Little Shop of Horrors at the

Read more about NCLR Assistant Editor HELEN STEAD with a book review in the Flashbacks section and more about Mary Robinette Kowal in Helen’s interview with her in the 2020 print issue of NCLR.