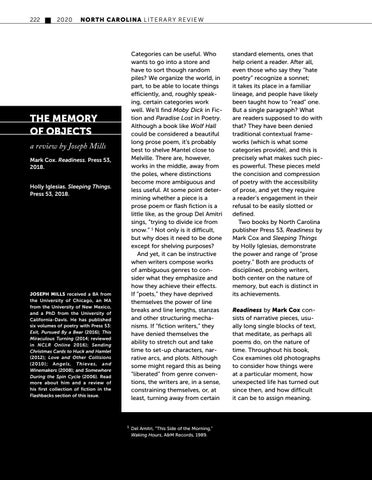 Categories can be useful. Who wants to go into a store and have to sort though random piles? We organize the world, in part, to be able to locate things efficiently, and, roughly speaking, certain categories work well. We’ll find Moby Dick in Fiction and Paradise Lost in Poetry. Although a book like Wolf Hall could be considered a beautiful long prose poem, it’s probably best to shelve Mantel close to Melville. There are, however, works in the middle, away from the poles, where distinctions become more ambiguous and less useful. At some point determining whether a piece is a prose poem or flash fiction is a little like, as the group Del Amitri sings, “trying to divide ice from snow.” 1 Not only is it difficult, but why does it need to be done except for shelving purposes? And yet, it can be instructive when writers compose works of ambiguous genres to consider what they emphasize and how they achieve their effects. If “poets,” they have deprived themselves the power of line breaks and line lengths, stanzas and other structuring mechanisms. If “fiction writers,” they have denied themselves the ability to stretch out and take time to set-up characters, narrative arcs, and plots. Although some might regard this as being “liberated” from genre conventions, the writers are, in a sense, constraining themselves, or, at least, turning away from certain

JOSEPH MILLS received a BA from the University of Chicago, an MA from the University of New Mexico, and a PhD from the University of California-Davis. He has published six volumes of poetry with Press 53: Exit, Pursued By a Bear (2016); This Miraculous Turning (2014; reviewed in NCLR Online 2016); Sending Christmas Cards to Huck and Hamlet (2012); Love and Other Collisions (2010); Angels, Thieves, and Winemakers (2008); and Somewhere During the Spin Cycle (2006). Read more about him and a review of his first collection of fiction in the Flashbacks section of this issue.

standard elements, ones that help orient a reader. After all, even those who say they “hate poetry” recognize a sonnet; it takes its place in a familiar lineage, and people have likely been taught how to “read” one. But a single paragraph? What are readers supposed to do with that? They have been denied traditional contextual frameworks (which is what some categories provide), and this is precisely what makes such pieces powerful. These pieces meld the concision and compression of poetry with the accessibility of prose, and yet they require a reader’s engagement in their refusal to be easily slotted or defined. Two books by North Carolina publisher Press 53, Readiness by Mark Cox and Sleeping Things by Holly Iglesias, demonstrate the power and range of “prose poetry.” Both are products of disciplined, probing writers, both center on the nature of memory, but each is distinct in its achievements. Readiness by Mark Cox consists of narrative pieces, usually long single blocks of text, that meditate, as perhaps all poems do, on the nature of time. Throughout his book, Cox examines old photographs to consider how things were at a particular moment, how unexpected life has turned out since then, and how difficult it can be to assign meaning.