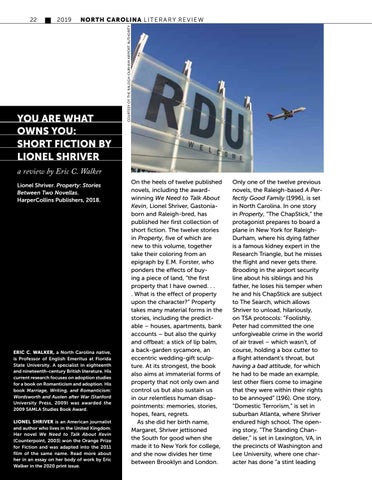 YOU ARE WHAT OWNS YOU: SHORT FICTION BY LIONEL SHRIVER a review by Eric C. Walker Lionel Shriver. Property: Stories Between Two Novellas. HarperCollins Publishers, 2018.

ERIC C. WALKER, a North Carolina native, is Professor of English Emeritus at Florida State University. A specialist in eighteenth and nineteenth-century British literature. His current research focuses on adoption studies for a book on Romanticism and adoption. His book Marriage, Writing, and Romanticism: Wordsworth and Austen after War (Stanford University Press, 2009) was awarded the 2009 SAMLA Studies Book Award. LIONEL SHRIVER is an American journalist and author who lives in the United Kingdom. Her novel We Need to Talk About Kevin (Counterpoint, 2003) won the Orange Prize for Fiction and was adapted into the 2011 film of the same name. Read more about her in an essay on her body of work by Eric Walker in the 2020 print issue.

COURTESY OF THE RALEIGH-DURHAM AIRPORT AUTHORITY

On the heels of twelve published novels, including the awardwinning We Need to Talk About Kevin, Lionel Shriver, Gastoniaborn and Raleigh-bred, has published her first collection of short fiction. The twelve stories in Property, five of which are new to this volume, together take their coloring from an epigraph by E.M. Forster, who ponders the effects of buying a piece of land, “the first property that I have owned. . . . What is the effect of property upon the character?” Property takes many material forms in the stories, including the predictable – houses, apartments, bank accounts – but also the quirky and offbeat: a stick of lip balm, a back-garden sycamore, an eccentric wedding-gift sculpture. At its strongest, the book also aims at immaterial forms of property that not only own and control us but also sustain us in our relentless human disappointments: memories, stories, hopes, fears, regrets. As she did her birth name, Margaret, Shriver jettisoned the South for good when she made it to New York for college, and she now divides her time between Brooklyn and London.

Only one of the twelve previous novels, the Raleigh-based A Perfectly Good Family (1996), is set in North Carolina. In one story in Property, “The ChapStick,” the protagonist prepares to board a plane in New York for RaleighDurham, where his dying father is a famous kidney expert in the Research Triangle, but he misses the flight and never gets there. Brooding in the airport security line about his siblings and his father, he loses his temper when he and his ChapStick are subject to The Search, which allows Shriver to unload, hilariously, on TSA protocols: “Foolishly, Peter had committed the one unforgiveable crime in the world of air travel – which wasn’t, of course, holding a box cutter to a flight attendant’s throat, but having a bad attitude, for which he had to be made an example, lest other fliers come to imagine that they were within their rights to be annoyed” (196). One story, “Domestic Terrorism,” is set in suburban Atlanta, where Shriver endured high school. The opening story, “The Standing Chandelier,” is set in Lexington, VA, in the precincts of Washington and Lee University, where one character has done “a stint leading