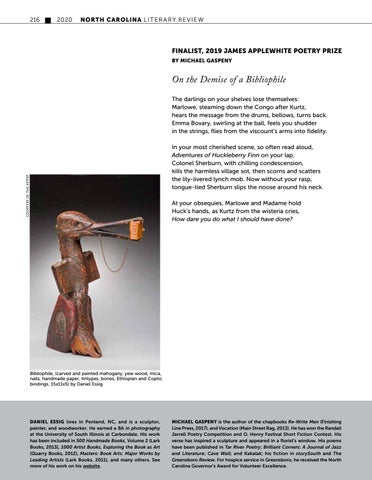 On the Demise of a Bibliophile The darlings on your shelves lose themselves: Marlowe, steaming down the Congo after Kurtz, hears the message from the drums, bellows, turns back. Emma Bovary, swirling at the ball, feels you shudder in the strings, flies from the viscount’s arms into fidelity.

In your most cherished scene, so often read aloud, Adventures of Huckleberry Finn on your lap, Colonel Sherburn, with chilling condescension, kills the harmless village sot, then scorns and scatters the lily-livered lynch mob. Now without your rasp, tongue-tied Sherburn slips the noose around his neck. At your obsequies, Marlowe and Madame hold Huck’s hands, as Kurtz from the wisteria cries, How dare you do what I should have done?

DANIEL ESSIG lives in Penland, NC, and is a sculptor, painter, and woodworker. He earned a BA in photography at the University of South Illinois at Carbondale. His work has been included in 500 Handmade Books, Volume 2 (Lark Books, 2013), 1000 Artist Books, Exploring the Book as Art (Quarry Books, 2012), Masters: Book Arts: Major Works by Leading Artists (Lark Books, 2011), and many others. See more of his work on his website.

MICHAEL GASPENY is the author of the chapbooks Re-Write Men (Finishing Line Press, 2017), and Vocation (Main Street Rag, 2013). He has won the Randall Jarrell Poetry Competition and O. Henry Festival Short Fiction Contest. His verse has inspired a sculpture and appeared in a florist’s window. His poems have been published in Tar River Poetry; Brilliant Corners: A Journal of Jazz and Literature; Cave Wall; and Kakalak; his fiction in storySouth and The Greensboro Review. For hospice service in Greensboro, he received the North Carolina Governor’s Award for Volunteer Excellence.