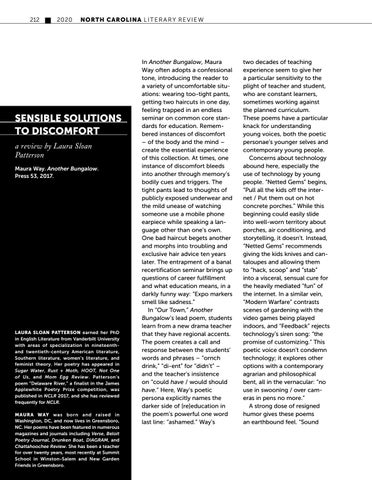 LAURA SLOAN PATTERSON earned her PhD in English Literature from Vanderbilt University with areas of specialization in nineteenthand twentieth-century American literature, Southern literature, women’s literature, and feminist theory. Her poetry has appeared in Sugar Water, Rust + Moth, HOOT, Not One of Us, and Mom Egg Review. Patterson’s poem “Delaware River,” a finalist in the James Applewhite Poetry Prize competition, was published in NCLR 2017, and she has reviewed frequently for NCLR. MAURA WAY was born and raised in Washington, DC, and now lives in Greensboro, NC. Her poems have been featured in numerous magazines and journals including Verse, Beloit Poetry Journal, Drunken Boat, DIAGRAM, and Chattahoochee Review. She has been a teacher for over twenty years, most recently at Summit School in Winston-Salem and New Garden Friends in Greensboro.

In Another Bungalow, Maura Way often adopts a confessional tone, introducing the reader to a variety of uncomfortable situations: wearing too-tight pants, getting two haircuts in one day, feeling trapped in an endless seminar on common core standards for education. Remembered instances of discomfort – of the body and the mind – create the essential experience of this collection. At times, one instance of discomfort bleeds into another through memory’s bodily cues and triggers. The tight pants lead to thoughts of publicly exposed underwear and the mild unease of watching someone use a mobile phone earpiece while speaking a language other than one’s own. One bad haircut begets another and morphs into troubling and exclusive hair advice ten years later. The entrapment of a banal recertification seminar brings up questions of career fulfillment and what education means, in a darkly funny way: “Expo markers smell like sadness.” In “Our Town,” Another Bungalow’s lead poem, students learn from a new drama teacher that they have regional accents. The poem creates a call and response between the students’ words and phrases – “ornch drink,” “di-ent” for “didn’t” – and the teacher’s insistence on “could have / would should have.” Here, Way’s poetic persona explicitly names the darker side of [re]education in the poem’s powerful one word last line: “ashamed.” Way’s

two decades of teaching experience seem to give her a particular sensitivity to the plight of teacher and student, who are constant learners, sometimes working against the planned curriculum. These poems have a particular knack for understanding young voices, both the poetic personae’s younger selves and contemporary young people. Concerns about technology abound here, especially the use of technology by young people. “Netted Gems” begins, “Pull all the kids off the internet / Put them out on hot concrete porches.” While this beginning could easily slide into well-worn territory about porches, air conditioning, and storytelling, it doesn’t. Instead, “Netted Gems” recommends giving the kids knives and cantaloupes and allowing them to “hack, scoop” and “stab” into a visceral, sensual cure for the heavily mediated “fun” of the internet. In a similar vein, “Modern Warfare” contrasts scenes of gardening with the video games being played indoors, and “Feedback” rejects technology’s siren song: “the promise of customizing.” This poetic voice doesn’t condemn technology; it explores other options with a contemporary agrarian and philosophical bent, all in the vernacular: “no use in swooning / over cameras in pens no more.” A strong dose of resigned humor gives these poems an earthbound feel. “Sound