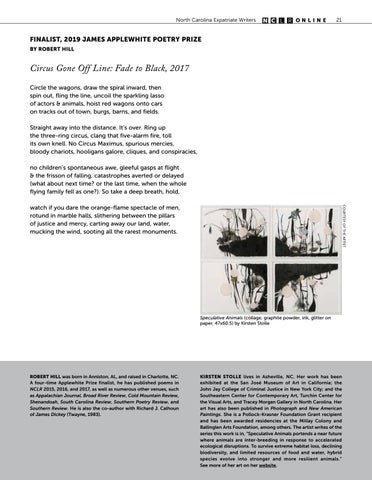 Circus Gone Off Line: Fade to Black, 2017 Circle the wagons, draw the spiral inward, then spin out, fling the line, uncoil the sparkling lasso of actors & animals, hoist red wagons onto cars on tracks out of town, burgs, barns, and fields. Straight away into the distance. It’s over. Ring up the three-ring circus, clang that five-alarm fire, toll its own knell. No Circus Maximus, spurious mercies, bloody chariots, hooligans galore, cliques, and conspiracies, no children’s spontaneous awe, gleeful gasps at flight & the frisson of falling, catastrophes averted or delayed (what about next time? or the last time, when the whole flying family fell as one?). So take a deep breath, hold, COURTESY OF THE ARTIST

watch if you dare the orange-flame spectacle of men, rotund in marble halls, slithering between the pillars of justice and mercy, carting away our land, water, mucking the wind, sooting all the rarest monuments.

ROBERT HILL was born in Anniston, AL, and raised in Charlotte, NC. A four-time Applewhite Prize finalist, he has published poems in NCLR 2015, 2016, and 2017, as well as numerous other venues, such as Appalachian Journal, Broad River Review, Cold Mountain Review, Shenandoah, South Carolina Review, Southern Poetry Review, and Southern Review. He is also the co-author with Richard J. Calhoun of James Dickey (Twayne, 1983).

KIRSTEN STOLLE lives in Asheville, NC. Her work has been exhibited at the San José Museum of Art in California; the John Jay College of Criminal Justice in New York City; and the Southeastern Center for Contemporary Art, Turchin Center for the Visual Arts, and Tracey Morgan Gallery in North Carolina. Her art has also been published in Photograph and New American Paintings. She is a Pollock-Krasner Foundation Grant recipient and has been awarded residencies at the Millay Colony and Ballinglen Arts Foundation, among others. The artist writes of the series this work is in, “Speculative Animals portends a near future where animals are inter-breeding in response to accelerated ecological disruptions. To survive extreme habitat loss, declining biodiversity, and limited resources of food and water, hybrid species evolve into stronger and more resilient animals.” See more of her art on her website.